Civilization Is Now On Suicide Watch - 4

The health of a civilization, in both mind and body, is fairly easy to discern.

At least that is so when the same criteria for diagnosing a nation is utilized.

Notable people have diagnosed large groups which we call nations.

One famous activist put it this way: “The greatness of a nation and its moral progress can be judged by the way its animals are treated.” - Mahatma Gandhi

A recent scientific report makes it all the more clear, as applied to civilization, how human greatness and moral progress is doing:


This latest edition of the Living Planet Report is not for the faint-hearted. One key point that jumps out and captures the overall picture is that the Living Planet Index (LPI), which measures more than 10,000 representative populations of mammals, birds, reptiles, amphibians and fish, has declined by 52 per cent since 1970. Put another way, in less than two human generations, population sizes of vertebrate species have dropped by half. These are the living forms that constitute the fabric of the ecosystems which sustain life on Earth – and the barometer of what we are doing to our own planet, our only home. We ignore their decline at our peril.

(Living Planet Report 2014, PDF, emphasis added; cf. Nature). There is no proper way to say we have destroyed over half of 10,000 species of mammals, birds, reptiles, amphibians, and fish, except to say "we are very quickly committing omnicide (a.k.a. 'suicide')." 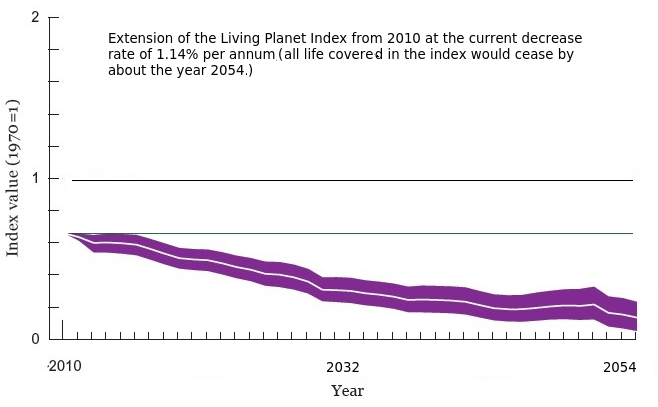 The bees, which are also essential to our global food endeavors, are in the emergency operating room too (Will We Destroy Food - The Bees? - 2).

In this series Dredd Blog has pointed out that nuclear war, global warming induced climate change, and habitat destruction are serious threats to human existence.

The graph just to the upper right (click to enlarge) shows a continuation of the graph at the top of today's post.

It graphs the current loss of 1.14 % per annum of the fauna population applied to the remaining 48% of fauna on the planet Earth.

Our current civilization is no different than those that have gone before us, those societies who committed suicide:


Historically, self-destruction is the common denominator for past human civilization, culture, and society:

(A Study of History, by Arnold J. Toynbee). As regular readers know, I have posted Sigmund Freud's writings where he indicated that psychoanalysis of groups, including civilization itself, would not prove unproductive ...

(Civilization Is Now On Suicide Watch). Human civilization is in grave danger of making true what the following three observers are quoted as saying:


“One would say that [man] is destined to exterminate himself after having rendered the globe uninhabitable.” - Lamarck (1817)
...
“The end of the human race will be that it will eventually die of civilization.” - Ralph Waldo Emerson
...
"Men have brought their powers of subduing the forces of nature to such a pitch that by using them they could now very easily exterminate one another to the last man. They know this --hence arises a great part of their current unrest, their dejection, their mood of apprehension." - Sigmund Freud

I am reminded that there are two approaches to evolutionary concepts.

The original perspective, which is out of favor now, was that evolution has some purpose which fundamentally includes ever increasing improvement, a progressive dynamic, whereby everything improves with time (e.g. Change Is Not An Option - It Is A Must, The Fittest Stars, Planets, & Species).

Evolution and improvement are practically synonymous in that perspective.

The contrary perspective is that evolution just happens randomly with no particular end result or purpose programmed into it.


I'LL BEGIN with an interesting debate that took place some years ago between Carl Sagan, the well-known astrophysicist, and Ernst Mayr, the grand old man of American biology. They were debating the possibility of finding intelligent life elsewhere in the universe. And Sagan, speaking from the point of view of an astrophysicist, pointed out that there are innumerable planets just like ours. There is no reason they shouldn't have developed intelligent life. Mayr, from the point of view of a biologist, argued that it's very unlikely that we'll find any. And his reason was, he said, we have exactly one example: Earth. So let's take a look at Earth. And what he basically argued is that intelligence is a kind of lethal mutation ... you're just not going to find intelligent life elsewhere, and you probably won't find it here for very long either because it's just a lethal mutation ... With the environmental crisis, we're now in a situation where we can decide whether Mayr was right or not. If nothing significant is done about it, and pretty quickly, then he will have been correct: human intelligence is indeed a lethal mutation. Maybe some humans will survive, but it will be scattered and nothing like a decent existence, and we'll take a lot of the rest of the living world along with us.

(What Kind of Intelligence Is A Lethal Mutation?). Everyday I see on the mainstream media commentators laughing and giggling when they are discussing climate change or nuclear war.

Is it nervous laughter or are they in a trance (Comparing a Group-Mind Trance to a Cultural Amygdala)?