Will Humans Evolve Into Machines? - Revisited 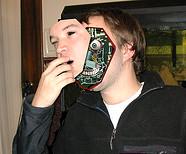 On this date in 2009 I contemplated some of the efforts of the 1% to free themselves from what was to come, then moved it to Ecocosmology Blog (Will Humans Evolve Into Machines?).

It is interesting, as that post points out, that several very wealthy people pay the big bucks to research that question.

Since then the melt of the polar ice caps has doubled (How Fifth Graders Calculate Ice Volume - 5),  so Oil-Qaeda is more nervous now than they were back then.

There is a lot of talk about going to Mars.

Anyway, here is the text from that post:
Tenet 3(f) of Ecocosmology recognizes that if the human species morphs or evolves into a species that does not depend on central stars with habitable planets orbiting them, the need for infinite nomadic travel from solar system to solar system can be avoided.

This blog also questioned the issue of machines in the scheme of evolution in a post Putting a Face on Machine Mutation a while back.


In a futuristic mode similar to Hawking, both Steven Dick, chief NASA historian and Carnegie-Mellon robotics pundit, Hans Moravec, believe that human biological evolution is but a passing phase: the future of mankind will be as vastly evolved sentient machines capable of self-replicating and exploring the farthest reaches of the Universe programmed with instructions on how to recreate earth life and humans to target stars.

Dick believes that if there is a flaw in the logic of the Fermi Paradox, and extraterrestrials are a natural outcome of cosmic evolution, then cultural evolution may have resulted in a post-biological universe in which machines are the predominant intelligence.

(Space Colonization). In the post Putting a Face on Machine Mutation linked to above, there is a discussion about machines evolving into biotic organisms many millions of years ago:


"Our cells, and the cells of all organisms, are composed of molecular machines. These machines are built of component parts, each of which contributes a partial function or structural element to the machine. How such sophisticated, multi-component machines could evolve has been somewhat mysterious, and highly controversial." Professor Lithgow said.
...
"François Jacob described evolution as a tinkerer, cobbling together proteins of one function to yield more complex machines capable of new functions." Professor Lithgow said.

"Our work describes a perfect example of Jacob's proposition, and shows that Darwin's theory of evolution beautifully explains how molecular machines came to be."


The Belgian biologist Louis Dollo was the first scientist to ponder reverse evolution. “An organism never returns to its former state,” he declared in 1905, a statement later dubbed Dollo’s law.

(NY Times). Well, that throws a monkey wrench into the equation doesn't it?

Wouldn't you know that some futurists are claiming that only the rich will evolve into machines as a separate species?

Can The First Bank of Reincarnation be far behind?
Noam Chomsky on scientific issues, such as Artificial intelligence, etc. ...