The ignorati have been busy the past few years spreading false memes about the "ice extent" increasing here and gaining there.

In this series Dredd Blog has been applying simple 5th grade arithmetic to the issue (How Fifth Graders Calculate Ice Volume, 2, 3).

The Cyrosat instruments have been doing observations of the ice sheets, a four-year study, and the truth of the matter is exactly like Dredd Blog has been informing regular readers in that the melting of the ice caps will redistribute weight and gravity, which means shifting pressure on earthquake and volcanoes (Is A New Age Of Pressure Upon Us?, 2, 3, 4, 5, 6).

In the sixth post of that series Dredd Blog pointed out that the Earth's crust is being reshaped by depletion of water in the west, especially in California, where it was likely to put torque of a different twist on the earthquake fault lines (and note Northern California’s Napa Valley Rocked By Strongest Earthquake in 25 Years).

Regular readers can now know that Dredd Blog was also correct in the series "How Fifth Graders Calculate Ice volume" linked to at the top of today's post: 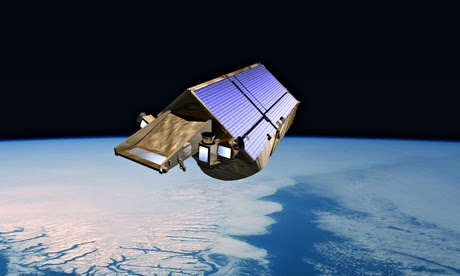 (Guardian, emphasis added; cf Cryosphere Journal PDF). What, "loss of ice ... more than doubled since 2009"  ... can you say "worse than previously thought" ... and can you remember who has been lying to you and who has not?

In a nation that bankrupts students with oppressive costs for education, ignorance generating organizations are also on the attack.

Even the old problem of ozone, which we assumed had been corrected, has not been:


NASA research shows Earth's atmosphere contains an unexpectedly large amount of an ozone-depleting compound from an unknown source decades after the compound was banned worldwide.

Carbon tetrachloride (CCl4), which was once used in applications such as dry cleaning and as a fire-extinguishing agent, was regulated in 1987 under the Montreal Protocol along with other chlorofluorocarbons that destroy ozone and contribute to the ozone hole over Antarctica. Parties to the Montreal Protocol reported zero new CCl4 emissions between 2007-2012.

However, the new research shows worldwide emissions of CCl4 average 39 kilotons per year, approximately 30 percent of peak emissions prior to the international treaty going into effect.

(Ozone Source & Ozone-Hole Persists). Remember all that "the ice is increasing at the poles" ideology by the ignorance generators?

Stay aware for opportunities to inform others.