It is Friday again, so, let's think about some science.

"Deep water" is given new meaning these days because of what is on the horizon (New Meaning Given to Deepwater Horizon).

Some think this deep water will be good for boat company stocks (Will This Float Your Boat?).

Some of our heretofore venerated  companies (MOMCOM: The Private Parts, 2, 3, 4, 5) are not respecting that veneration, nor are they respecting the sanctions being placed on Russia:


After years of preparation, ExxonMobil and OAO Rosneft have received the 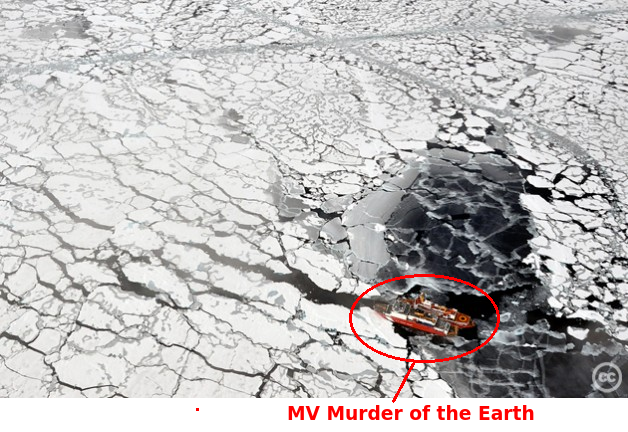 go-ahead to begin drilling a $700 million Arctic Ocean oil well in the Kara Sea. The well, which will be Russia’s most northerly, is to be the first of as many as 40 offshore wells planned for the Arctic by 2018.

The well will access a geological formation roughly the size of the city of Moscow. The formation is expected to contain roughly 9 billion barrels of oil.

(Russia [ExxonMobil] Prepares To Drill New Arctic Well, emphasis added). The graphic to the upper right (click to enlarge) shows how suicidally desperate our civilization is (Civilization Is Now On Suicide Watch, 2, 3).

How did we become addicted to the dirty oil drug so badly that we are using the marine drilling vessel "M/V Murder of the Earth" to help us commit slow suicide (The Peak of Sanity - 3)?

It seems that those sanctions ("what sanctions") and murder charges are not a disturbance to those in OIl-Qaeda who are too big to jail (MOMCOM's Mass Suicide & Murder Pact, 2, 3, 4, 5), i.e, fat, dumb, and "everybody is happy" (OPEC’s 165th Meeting).

Even America has the Sarah "drill baby drill" Palin virus in her private empire parts:


Royal Dutch Shell submitted a plan to the federal government on Thursday to try once again to explore for oil in the Alaskan Arctic, following years of legal and logistical setbacks as well as dogged opposition from environmentalists.

While the plan is just a first step in the process, it reflects the energy potential in the Arctic. Shell’s proposed programs consist of two drilling rigs working simultaneously in the Chukchi Sea, which could produce more than 400,000 barrels of oil a day.

(Shell Game @ Murder Pact). Their past experience in the Arctic does not seem to inform them of very much (Sanity Can't Win For Losing, Barry & Oil-Qaeda vs Arctic Wilderness).

The previous post in this series is here.
While My Keyboard Guitar Gently Weeps (video below lyrics):

I don't know why nobody told you
How to unfold your love
I don't know how someone controlled you
They bought and sold you.