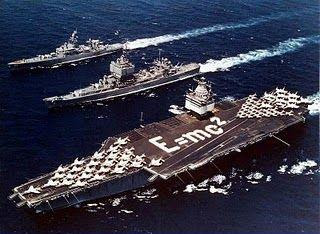 Once upon a time Dredd Blog did a post "Soupy Sales And Evolutionary Tales", which is part of or akin to the 'weekend rebel science' and the 'buy textbook company stock' types of series.

Those types of posts tend to point out how difficult it is sometimes for textbook companies to keep up with scientific discovery, which moves just a little slower than political book companies cranking out books explaining how this or that politician now knows everything.

Writing a book is now part and parcel of presidential electioneering, just as much or more than the requirement that academics write books to stay in the cool loop.

Since we have demonstrated that MOMCOM is in, around, over, and next to us, lets think about MOMCOM science again, in terms of why our science is brain-dead.

The formula on the deck of the carrier in the photo above is E = mc², which Dredd Blog interprets to mean: Exceptionalism = MOMCOM Squared.

Lately these "rocket scientists", especially within the climate change denier meme complex, have proven that jelly brains do not need structure, possibly indicating that they did in fact evolve from bubbles along with some of the others.

Meanwhile, less religious scientists have been working on an analysis which will cause the demise of a truckload of textbooks, following a shockingly interesting new discovery:

Every cubic meter of air holds up to 100 million microorganisms, but the diversity and behavior of these microbes remains masked to microbiologists — until recently, that is ... microbes also help create the intricately beautiful designs in snowflakes and facilitate the formation of clouds ... Recent research published in PNAS suggests that the diversity of microbial life in the air is on par with the soil, at least in urban areas, yet the air remains vastly understudied in comparison.

(Atlas of The Atmosphere). The deniers still think the Sun has more to do with global warming than human activity does, probably because the Sun is "obviously quite warm".

The reality of Life According To Science supports their theory, however, that part of their rap won't happen until long after we who are here now are long gone.

Kinda like the dude who wrote Known Unknowns.
Posted by Dredd at 5:08 AM