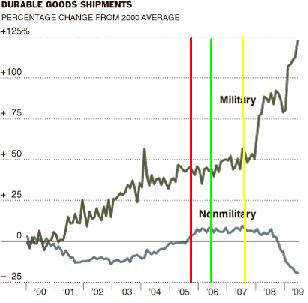 The devastating quake in Chile should be a wake-up call to the government of the United States, according to some seismologists.

We are wondering if there is anyone home to receive that wakeup call, since we are fighting two wars in the middle east, beating the drums about Iran, and reactivating a naval fleet that has been mothballed for over 5 decades.

Data from seismologists indicates that we here in the U.S. are due for a large quake somewhere in the not too distant future.

Other data indicate that our infrastructure is therefore in danger:

Chile's transportation infrastructure took a big hit, as seen in the collapsed bridges and highways.

It should be a wake-up call to the U.S., noted Dr. McNutt, given the fragile state of America's infrastructure even before a quake.

The U.S. Department of Transportation's 2008 report on the state of our highways found that nearly 14% of the nation's bridges are "functionally obsolete," with another 12% "structurally deficient."

(CBS News, emphasis added). On this blog we have recently been looking into the whereabouts of the largest infrastructure spending legislation in U.S. history.

The graph above shows the skyward spending spree on military matters, and the tanking into the basement crash of the domestic, non-military budget. 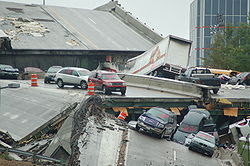 The vertical red line marks the time when the largest infrastructure legislation in U.S. history was passed, the vertical green line shows when money from that legislation could have first been reasonably put to use, and the yellow vertical line shows when the bridge collapse happened in Minnesota, killing Americans on their way to work.

American engineers do not give us a good report card after that money was set aside for infrastructure improvement.

The big question is where did the money go that was supposed to go to U.S. infrastructure?

Anyone suspect it is being used to rebuild Iraq and Afghanistan?
Posted by Dredd at 3:33 AM