A "W" On Every Compass Point 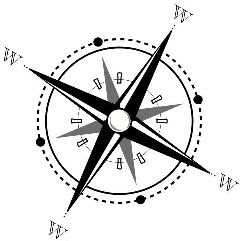 Is that going to replace the old politician's promise of the days of yore?

Remember "a chicken in every pot and a car in every garage"?

Will that be replaced with a "W" on every point in the compass of U.S. foreign policy, not to mention domestic policy?

Does the "W" come from "George W. Obama" or from the longest lasting thing in U.S. foreign policy these daze, War?

Or does it come from the daddy Warbucks soon to spend furiously on elections, since the supreme court let the dogs out yesterday in Citizens United v. Federal Election Commission?

Either way, the voters rejected it in the last presidential election, and will reject it again in November.

The boy scouts who have grown up to be cowboy political advisers to Bush II, Hillary Clinton during her campaign, and now the governing President Obama, have all been ideologically intimidated by the military media oil complex.

The military media oil complex are not the people's choice, so, the propagandists in that shadow zone have chosen to continue to try to deceive the public even as they govern by intimidating the elected.

The only problem with that is the people see through it, but the warsters don't care, because they have Jesus on their gun sights, which they dutifully take to mean "God On Our Side".
Posted by Dredd at 3:57 AM