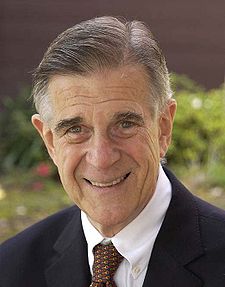 There were Senators like Byrd, and House of Representative members like Pete Stark, in the year 2002, who had vision.

But vision was discounted as a kooky thing, and those that had vision were discounted by the dementia congress was suffering from then, and still is.

Where there is no vision the people perish, and the leaders supplant vision with "excuses" and whining.

The Honorable Pete Stark said this about the "AUMF Resolution" before the Iraq disaster happened:


Mr. Speaker, I rise in opposition to this resolution.

I am deeply troubled that lives may be lost without a meaningful attempt to bring Iraq into compliance with UN resolutions through careful and cautious diplomacy.

The bottom line is I don’t trust this President and his advisors.

Make no mistake, we are voting on a resolution that grants total authority to the President who wants to invade a sovereign nation without any specific act of provocation. This would authorize the United States to act as the aggressor for the first time in our history.

It sets a precedent for our nation - or any nation - to exercise brute force anywhere in the world without regard to international law or international consensus.

Congress must not walk in lockstep behind a President who has been so callous to proceed without reservation, as if war was of no real consequence.

"Somebody," she said, "should be worrying about how all this could affect his handling of future encounters with some Saddam Hussein." How prophetic, Ms. Ivins.

Let us not forget that our President - our Commander in Chief – has no experience with, or knowledge of, war. In fact, he admits that he was at best ambivalent about the Vietnam War. He skirted his own military service and then failed to serve out his time in the National Guard. And, he reported years later that at the height of that conflict in 1968 he didn’t notice "any heavy stuff going on."

So we have a President who thinks foreign territory is the opponent’s dugout and Kashmir is a sweater.

What is most unconscionable is that there is not a shred of evidence to justify the certain loss of life. Do the generalized threats and half-truths of this Administration give any one of us in Congress the confidence to tell a mother or father or family that the loss of their child or loved one was in the name of a just cause?

Is the President’s need for revenge for the threat once posed to his father enough to justify the death of any American?

I submit the answer to these questions is no.

Aside from the wisdom of going to war as Bush wants, I am troubled by who pays for his capricious adventure into world domination.

The Administration admits to a cost of around $200 billion!

Corporations won’t pay. They’ll cook the books and move overseas and then send their contributions to the Republicans.

Rich kids won’t pay. Their daddies will get them deferments as Big George did for George W.

Well then, who will pay?

School kids will pay. There’ll be no money to keep them from being left behind - way behind.

Seniors will pay. They’ll pay big time as the Republicans privatize Social Security and rob the Trust Fund to pay for the capricious war.

Medicare will be curtailed and drugs will be more unaffordable. And there won’t be any money for a drug benefit because Bush will spend it all on the war.

Working folks will pay through loss of job security and bargaining rights.

Our grandchildren will pay through the degradation of our air and water quality.

And the entire nation will pay as Bush continues to destroy civil rights, women’s rights and religious freedom in a rush to phony patriotism and to courting the messianic Pharisees of the religious right.

The questions before the members of this House and to all Americans are immense, but there are clear answers. America is not currently confronted by a genuine, proven, imminent threat from Iraq. The call for war is wrong.

And what greatly saddens me at this point in our history is my fear that this entire spectacle has not been planned for the well being of the world, but for the short-term political interest of our President.

Now, I am also greatly disturbed that many Democratic leaders have also put political calculation ahead of the President’s accountability to truth and reason by supporting this resolution.

But, I conclude that the only answer is to vote no on the resolution before us.

(Representative Pete Stark, October 2002, quoted on Daily Kos [they "lost" it so read it here]). Senator Byrd had said the same thing.
Posted by Dredd at 9:22 AM