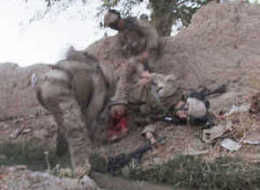 The Pentagon came right out into the open, leaving the shadows from where they like to control the media, and urged propaganda.

Out in the open they scolded the media for showing a picture of a dying soldier in Afghanistan, and the media dutifully wilted on the vine.

The Pentagon is marketing the war like a commodity, so they do not want disruptions like the photo to upset customers, because they are afraid people will think it is a real place instead of a glory movie I suppose.

The AP is retracting from comments made not too long ago where it had pointed out:

The Bush administration turned the U.S. military into a global propaganda machine while imposing tough restrictions on journalists seeking to give the public truthful reports about the wars in Iraq and Afghanistan, Associated Press chief executive Tom Curley said Friday.

(Warsters Press For Propaganda). That would mean that they no longer intend to keep the Pentagon in check and to hold it accountable?

As if they have any ability to do that since they are owned by war contractors that the Pentagon can control through unaccounted for tax payer dollars, as was pointed out in a recent post.

UPDATE: Ownership of news delivery is shown here.
Posted by Dredd at 6:43 AM