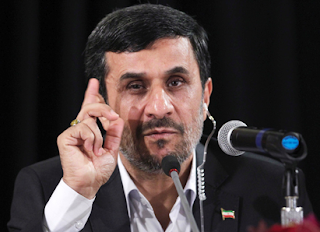 This blog has been pointing out the neoCon aspects of Iran's Ahmadinejad, the front man for the dictatorial robe wearers who care nothing for fair elections or democracy for that matter.

The similarity Sarah and Mahmoud have is getting all mavericky, we pointed out.

There are some others who are warming to these comparisons:


Is Sarah Palin America's Mahmoud Ahmadinejad? The two differ in many key respects, of course, but it is remarkable how similar they are. There are uncanny parallels in their biographies, their domestic politics and the way they present themselves -- even in their rocky relationships with party elders.

Both are former governors of a northwest frontier state with great natural beauty (in Ahmadinejad's case, Ardabil). Both are known for saying things that produce a classic Scooby-Doo double take in their audiences. Both appeal to a sort of wounded nationalism, speaking of the sacrifice of dedicated troops for an often feckless public, and identifying themselves with the common soldier. They are vigilant against foreign designs on their countries and insist on energy and other independence.

(Juan Cole, Salon). It is not flattering when one thinks about it and realizes that Ahmadinejad is putting his political rivals on trial for trying to show that the elections were rigged.

Some of these similarities are lost on people here in the U.S. who think Ahmadinejad is progressive but Palin is not.

Neither one of them even comes close.
Posted by Dredd at 5:09 AM