Obama Loses My Vote For Re-election? 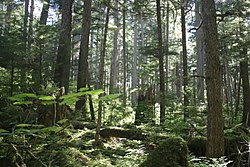 According to the Juneau Empire, where I once worked before many of you were born, the Obama Administration has reversed the Clinton Administration and is going to allow logging in the Tongass National [Rain] Forest:

The U.S. Forest Service agreed Monday to sell timber to a Ketchikan mill in a roadless area of the Tongass National Forest after the Obama administration's approved the sale.

Orion North timber sale is the first such awarded since Secretary of Agriculture Tom Vilsack announced in May he would personally review all timber sales in roadless areas of national forests in the next year.

He's doing that while the Obama administration takes some time to review the Clinton-era Roadless Area Conservation Rule, which banned road-building on about 58 million acres of national forest land nationwide but has been challenged since it was issued.

(Juneau Empire). If you have not been to the Tongass, it is much like Big Sur, except with fewer people and no roads, and it is the "Earth's largest remaining temperate rainforest".

The loggers won't stop with a little logging, and the foreseeable damage they will eventually do is far, far greater than what would have been done at ANWR, which was a lot of damage.

The forest floor in the Tongass in places is two feet thick moss, soft as the best beds in the world in my opinion, and the REM sleep you get while resting on a hike there is out of this polluted world.

In some places when it rains in the Tongass, which is frequent in a 90 inches per year rain forest, the rain does not touch that carpet, that forest floor, because the canopy is so much like a thick umbrella.

I remember looking up and way, way up there was a thickness of green and other colours, but no blue sky; yes so thick with tree life one could not see the sky in places.

Anyway, this logging contract was the last straw for me; when I heard this, after all the placating of the war criminals and the placating on a thousand other fronts in the name of "bi-partisanship", I went activist.

Unless Obama reverses the Secretary of Agriculture Tom Vilsack on this abortion of justice, I will actively campaign against Obama's re-election because "President Obama supported the roadless rule in his campaign" (ibid).

I will do this protest from the Tongass area itself, because I am going to go there to blog from there, and "inhabit a tree house" to live in while I attempt to stop the logging rape of the earth's largest temperate rain forest.

Anyone know any groups planning to go there too?

The party I will support in the next election will not be republican; it will be green, constitutional, independent, or anything else but republican or democrat if the democrats do not stop this.