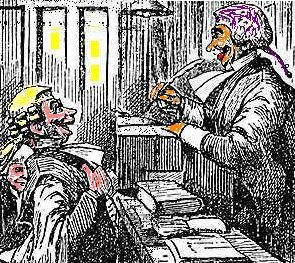 The neoCon mantra flows from their never drought limited but always polluted Hypocrisy River, which is always flowing through the home towns of Senator Cornyn and Senator Sessions; both of whom are from the "patriot states" who followed the president of the rebellion, Jefferson Davis.

Their mantra I speak of is "activist judges are bad people", even while their Supreme Conservatives, whom they gleefully put on the federal bench for life, are doing the activist judge thingy.

One thing "activist judges" do, according to these cornyservatives, is resort to the law of foreign nations when making their decisions.

Like when we were at war with a foreign nation that was killing us left and right because that nation wanted to keep us in subjection to all of its laws.

That "common law" of that foreign nation we were sworn to defeat in war was mentioned in our Bill of Rights:

In Suits at common law, where the value in controversy shall exceed twenty dollars, the right of trial by jury shall be preserved, and no fact tried by a jury, shall be otherwise re-examined in any Court of the United States, than according to the rules of the common law.

(U.S. Constitution, Seventh Amendment, emphasis added). Guess what? There were no U.S. Courts, no U.S. common law, no U.S. "rules of the common law"; no congress, no congressional laws, no judiciary, and no president.

At least until the constitution was written, signed, and then ratified by the 13 states or colonies; until U.S. elections took place, U.S. judges were appointed, U.S. courts were financed, states were accepted into the United States, the common law was adopted as U.S. law, and then somebody sued somebody.

And gasp of all gasps, the "rules of the common law", like the common law itself, were judge made laws of courts rather than of legislators. Oh Lordy!!!!!!!!!!!

But since the foreign nation we were at war with had some good law, we adopted the good law of that foreign power as our own.

Hey cornyservatives, you guys are fool arse holes and you are talking through the wrong orifice, surrounded by the wrong sphincter.

Take the counsel of Albert Einstein who said "Make everything as simple as possible, but not simpler".

I won't belabor the point if you shut up Cornyn.
Posted by Dredd at 7:45 PM