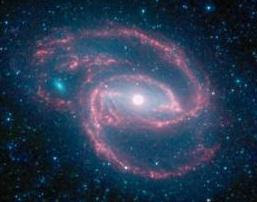 The eye in the sky (Hubble Telescope) has been given more time to take a look "out there".

Since our science declares that our star, The Sun, will destroy us some time in the future, we must look for another home planet.

By "our" of course I mean the human race (the human species) if you will.

Our science, specifically our physics, does not tell us how to move matter at the speed of light ('c' in the equation e=mc²) in any realistic way.

When we talk about the speed of light we are talking about photons. But we must travel at that velocity, at a minimum, to effectively find a new home.

At that speed it would take four years to reach the nearest star, then 4 more years to return after staying a while.

But there is no habitable planet there.

We have the Kepler mission looking for potentially habitable planets, which are hundreds and thousands of years away, at the speed of light.

It will take perhaps thousands of years to learn the physics of that kind of space travel, after we develop that new physics which does not yet exist.

The bottom line is that we must stop being a hostile species, hostile to each other, hostile to our own home world, and hostile to the notion of what we must do to avoid a catastrophic death.

A very recent discovery indicates that we may not have an unimaginable amount of time before our Sun becomes the death of our planet by removing it from existence.

Another discovery shows a very large and well known red giant, Betelgeuse, is shrinking for an unknown reason.
Posted by Dredd at 5:54 PM