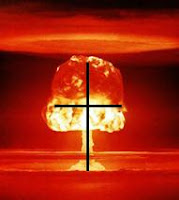 Andy Rooney has the heart to say something that needs to be said, especially in our morphing, shape shifting, and inexplicable empire in its latter daze:

... it seems wrong that we have so often saved this virtue [courage] to use for our least noble activity - war. The goal of war is to cause death to other people ...

I wish we could dedicate Memorial Day, not to the memory of those who have died at war, but to the idea of saving the lives of the young people who are going to die in the future if we don’t find some new way - some new religion maybe - that takes war out of our lives.

That would be a Memorial Day worth celebrating.

(Andy Rooney a War Vet, 60 Minutes, emphasis added). The 4th President and the 34th President both had similar sentiments to Rooney's at times.

The simple fact of the matter is that a much more in-depth and comprehensive understanding is required for life on this planet to continue into the ages.

Otherwise as explained above, there will come a Memorial Day for the earth, but it is unclear who would observe it.

Next posts in the series are here and here.
Posted by Dredd at 9:04 PM