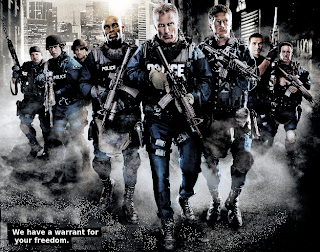 This was a case dealing with the 4th Amendment of the U.S. Constitution.

More specifically, it concerned the warrant-less search of a vehicle incident to an arrest.

Hey, isn't a wiretap and similar electronic surveillance a "search", and therefore a warrant-less "wiretap" is a violation of the 4th Amendment?

In Katz v US, supra, in 1967 the US Supreme Court overruled Olmstead, and said, yes, electronic surveillance is a search.

Any such electronic surveillance without a warrant is per se unreasonable.

Thus, in the NSA electronic surveillance cases (which include AT&T, Verizon, and some other telecoms as defendants) the burden should be on the government to show why all those NSA wiretaps without warrants are legal.

Warrant-less wiretaps are per se illegal still according to today's ruling in the US Supreme Court.

The next post in this series is here.
Posted by Dredd at 1:58 PM