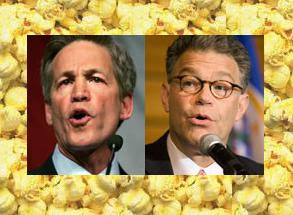 The oral argument before the Minnesota Supreme Court will have to wait until June 1 of this year.

Their decision will follow sometime after that in the summer. If the case is reversed it could be next year before there is an end to it.

If they affirm Franken as the winner Pop Cornyn and Coleman will take the case to the US Supreme Court hoping for another Bush v Gore which gave us Bush II, the gift that keeps on giving us torture news and bad economic news, not to mention endless wars.

That could mean further delays to a decision as well. What a drama, what a movie. Is there a better way?

Affectionately called "The election that should have been over last year" or "The EI movement's favorite movie", Coleman v Franken is the longest election in Minnesota's history.

Instead of seeing this election as the disaster it really is, the Brad Blog has unabashedly said:

Franken Declared 'Winner,' But Final Certification Will Likely (and Appropriately) be Delayed ... Excellent provision in MN law ... A very good provision in MN's law --- not found in most other states --- may delay Franken's seating, meaning he will not be sworn in with rest of Congress at the beginning of the new session slated to start tomorrow. Ultimately, however, the provisions should ensure that whoever is eventually sworn in to serve as the state's Senator will not be forced to serve under a cloud ... Would that all of the other states in the union had such a provision ... The voters of MN deserve that much, no matter how long it takes ...

(January 5 Thread, emphasis added). Come on Brad Blog, publicly admit for the sake of your readers that you were wrong.

Every other state you have publicly dissed, by making obviously erroneous statements, have all finished their elections last year. As it should be.

Minnesota legislators, get out your thinking caps and fix this problem. You do not need EI weathermen to know which way the wind blows.