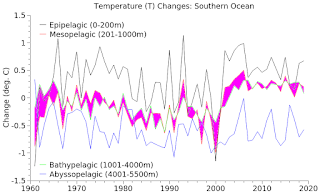 In this series the subject has been the flows/plumes of seawater caused by the conversion of glacial ice into seawater.

The reason that the word 'ghost' is used is that this phenomenon is not generally recognized ('hidden in plain sight').

The dynamics involved have been described as an initial flow of infrared photons radiating from the warmer seawater into the colder glacial ice.

When a sufficient number of photons have entered into the ice, thereby impacting the heat energy content sufficiently, a relevant area of the glacial ice melts.

In addition to that, the gravitational depth-pressure on the seawater, along with its greater density, helps to force the less-dense melt water upwards.

This makes a plume along the glacial ice face all along the grounding line area. 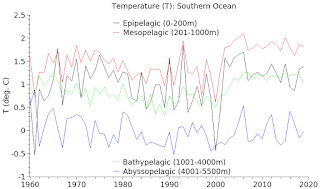 This cycle continues as long as photons radiate from the ambient seawater into the glacial ice.

Note that this is not the same type of plume that is made by basal flow of melt water along the bottom of the glacier, although the two types of plume waters may from time to time intermingle to become a single upward flowing plume.

Basal flow plumes are generally considered to originate by surface melt caused by warm weather at or above the surface of a glacier, which flows through crevasses or moulins down to the base of the ice sheet or glacier, then outward toward the grounding line.

In contrast, thermal plumes flow upward, and happen at all relevant depths at all times when the ambient seawater is warmer than the glacial ice (IOW not just on warm weather days when the surface of the ice sheet or glacier melts). 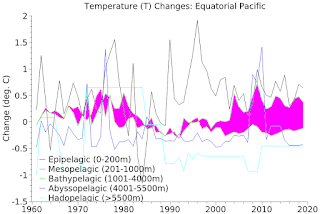 The graphs in this post are designed to show the vertical expanse of the grounding line depths involved, and are of two types.

The two types are easy to distinguish from one another because of the purplish color band on the change-in-temperature type of graph. 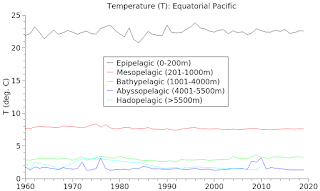 The color band on the temperature change graphs highlight the depths at which tidewater glaciers are likely to be impacted by seawater.

The grounding line of many if not most tidewater glaciers in Greenland and Antarctica, and the glacial ice above the grounding line, will have contact with the warmer seawater at the pelagic depths depicted by the purple colored highlight in the change-in-temperature graphs (Mesopelagic and Bathypelagic depths). 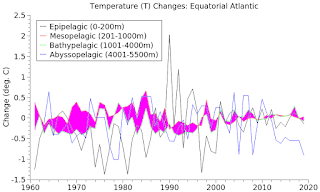 The expanse of the depths involved begins at the top of the Mesopelagic depth (200 meters) and extends down to the bottom of the Bathypelagic depth (4,000 meters).

The locations of the tidewater glaciers most likely to be impacted by this phenomenon  are those in the Arctic Ocean and in the Southern Ocean. 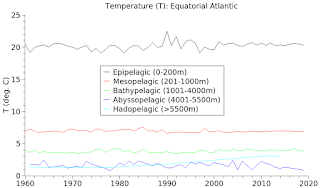 The application of quantum mechanics that applies to the plume concept is considered in the series applying the dynamics of photons in seawater (Quantum Oceanography, 2, 3, 4). 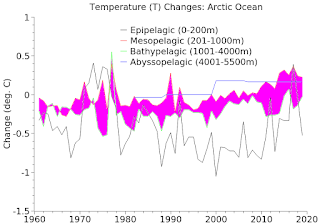 The focus on grounding line area plumes is in accord with what Dr. Rignot urged in the video presented in the previous post of this series (here).

The potential quantity of sea level change caused by the plume phenomenon is considerable. 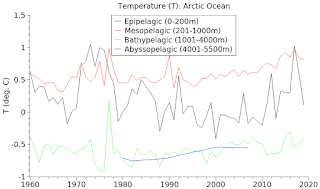 Underestimating sea level change has been going on for way too long, so this and other potential causes need to be considered more seriously.

As was quoted in a previous post, "we know more about the surface of the Moon and Mars than we know about the bottom of the oceans here on Earth".

Remember the passenger airliner that went missing and was not found even though the bottom of the ocean was searched incessantly for quite a while (MH370).

Sea level change needs to be studied as if civilization itself and all of us in it are endangered by glacial ice melt.