Will This Float Your Boat - 12

The Risk & Insurance Management Society (RIMS) had its annual conference this week in San Diego, CA. (hat tip to Walter, who commented @ The Extinction of Robust Sea Ports - 4).

The RIMS people are professionals who are in the business of risk management, which now keeps a close eye on climate change dynamics (You Are Here - 5).

The "worse than previously thought" trance, which incessantly plagues the warming science commentariat, is at it once again:


"That revelation was made by an official with the National Oceanic and Atmospheric Administration [NOAA] on Tuesday at the annual RIMS conference for risk management and insurance professionals in San Diego, Calif.

The conference is being attended by more than 10,000 people, according to organizers. It was day No. 3 of the conference, which ends Wednesday.

Margaret Davidson, NOAA’s senior advisor for coastal inundation and resilience science and services, and Michael Angelina, executive director of the Academy of Risk Management and Insurance, offered their take on climate change data in a conference session titled “Environmental Intelligence: Quantifying the Risks of Climate Change.”

Davidson said recent data that has been collected but has yet to be made official indicates sea levels could rise by roughly 3 meters or 9 feet by 2050-2060, far higher and quicker than current projections. Until now most projections have warned of seal level rise of up to 4 feet by 2100.

These new findings will likely be released in the latest sets of reports on climate change due out in the next few years.

“The latest field data out of West Antarctic is kind of an OMG thing,” she said."

(Sea Level Rise Will Be Worse and Come Sooner, emphasis added). One has to wonder why they are holding back the data that confirms or agrees with the Hansen et al. paper?

That Hansen paper came out in a science journal, for peer review, in June of last year (A Paper From Hansen et al. Is Now Open For Discussion, 2, 3).

The Hansen et al. paper indicated a similar scenario to the NOAA revelation:


I mentioned the Hansen et al. paper on Wednesday, not having read it then, but I kept that post limited to "sea levels rising as much as 10 feet in the next 50 years," and "sea level rise is the big impact of human made climate change"

(New Climate Catastrophe Policy: Triage - 13, emphasis added). To spice the discourse up a bit more, notice that Antarctica put on an example display:


The NIWA reported a calving event from the Nansen Ice Shelf on April 11, 2016. They are concerned about a mooring in Terra Nova Bay in front of the ice shelves. The area of the Nansen Ice Shelf is 1500 square kilometers, these icebergs have a combined estimate of approximately 250 square kilometers. This is a substantial calving event for such a small system.

This news comes on the heels of our having found out that Oil-Qaeda has its servant governments (MOMCOM: The Private Parts, 2, 3, 4, 5),

Somehow, they have been lying us closer and closer to catastrophe for some sixty years now (Oil-Qaeda & MOMCOM Conspire To Commit Depraved-Heart Murder - 5).

In fact, Oil-Qaeda has been so brazen that ~54 years ago (1962) they put an ad in Life magazine expressing their hubris and criminal mindset: 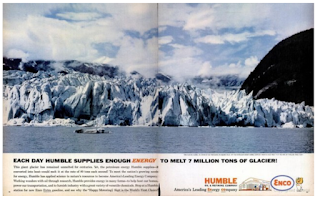 (50 Years Ago Big Oil Bragged). That was evidently way back when being utterly stupid was legal by way of sovereign impunity (Sovereign Impunity: A Child of the Supreme People). We have come a long way baby ... from that ... right?

Did I mention Greenland (Greenland’s Ice Sheet Is Melting So Fast Right Now, Scientists Thought It Was an Error, Atmospheric Warming Induced Melt) ?