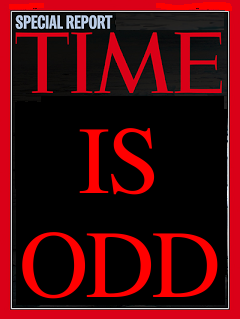 Regular readers know that we often deal with some scientific issue on Friday.

The fact of that reality will come from the words of modern scientists and religionists themselves.

First, let's take a look at what a modern physicist says about our modern scientific thinking in terms of our concept of time and space being like those of ancient religion:


The main question I'm asking myself, the question that puts everything together, is how to do cosmology; how to make a theory of the universe as a whole system. This is said to be the golden age of cosmology and it is from an observational point of view, but from a theoretical point of view it's almost a disaster. It's crazy the kind of ideas that we find ourselves thinking about. And I find myself wanting to go back to basics—to basic ideas and basic principles—and understand how we describe the world in a physical theory.
...
And the metaphor here—which comes from atomism that comes from Democritus [c. 460 – c. 370 BC] and Lucretius [c.99—c.55 BC] —is that physics is nothing but atoms moving in a void and the atoms never change. The atoms have properties like mass and charge that never change in time. The void—which is space in the old days never changed in time—was fixed and they moved according to laws ...
...
Why are we confident of that? We're confident of that because we have a kind of metaphysical belief that there are laws of nature that are outside time and those laws of nature are causing the outcome of the experiment to be what it is. And laws of nature don't change in time. They're outside of time. They act on the system now, they acted on the system in the same way in the past, they will act the same way in a year or a million or a billion years, and so they'll give the same outcome. So nature will repeat itself and experiments will be repeatable because there are timeless laws of nature.

(Think About Nature, by Dr. Lee Smolin, emphasis added). Religion, spiritualism, and/or mysticism is still at the very core of many of the main pillars of today's scientific reasoning.

The religious history part of this post is one about Mithra, and its application to today's modern religion will concern the religion of the U.S. Military.

Let's set the stage with some ancient religious history about Mithra:


Because of its evident relationship to Christianity, special attention needs to be paid to the Persian/Roman religion of Mithraism. The worship of the Indo-Persian god Mithra dates back centuries to millennia preceding the common era. The god is found as "Mitra" in the Indian Vedic religion, which is over 3,500 years old, by conservative estimates. When the Iranians separated from their Indian brethren, Mitra became known as "Mithra" or "Mihr," as he is also called in Persian.

Hittite and Mitanni kingdoms around 1400 BCEBy around 1500 BCE, Mitra worship had made it to the Near East, in the Indian kingdom of the Mitanni, who at that time occupied Assyria. Mitra worship, however, was known also by that time as far west as the Hittite kingdom, only a few hundred miles east of the Mediterranean, as is evidenced by the Hittite-Mitanni tablets found at Bogaz-Köy in what is now Turkey. The gods of the Mitanni included Mitra, Varuna and Indra, all found in the Vedic texts.

The Indian Mitra was essentially a solar deity, representing the "friendly" aspect of the sun. So too was the Persian derivative Mithra, who was a "benevolent god" and the bestower of health, wealth and food. Mithra also seems to have been looked upon as a sort of Prometheus, for the gift of fire. (Schironi, 104) His worship purified and freed the devotee from sin and disease. Eventually, Mithra became more militant, and he is best known as a warrior.

(Mithra Oriented Religion). We have heard the word "warrior" a lot over the past two decades, when our soldiers are referred to.

In the recent Dredd Blog post Doing The Right Thing - Mithraism - 2 other subject-matter related series are linked to, which work hand and glove to show the strange obsession the current military has with warmonger religions.

In those posts Dredd Blog points out that the warrior ideology belies the Pentagon's assertion that the U.S. Military is all about Christianity.

The Pentagon asserts that notion even though a recent U.S. President wrote a letter to the French Head of State explaining his reason for invading Iraq.

In that letter Bush II quoted from the Christian text of the Bible's Book of Revelation (The Dogma of The High Priest In Chief) and even stated that God had told him to do the invasion (Bush: God told me to invade Iraq).

Such loser ideology from the ancient past should not guide our future aspirations (The Tenets of Ecocosmology).

Have a good weekend.