With the first post of this series we began to take a look at the curious bent of the military to try to associate itself with Christianity.

Later we found out that they even make soldiers "go to Sunday school" or else (Marine Corps Officially Decries Lack of Spiritual Faith).

It was then that Dredd Blog began to ponder that dichotomy in greater detail.

Think about what kind of intelligence demands "spirituality" within a vast military killing machine (MOMCOM - A Mean Welfare Queen).

A vast killing machine which is sucking the prosperity of the nation down into a dark abyss --even as it kills maims, and destroys people, places, and things around the world (see e.g. The Virgin MOMCOM - 6, On The Origin of The Bully Religion, and Bully Worship: The Universal Religion).

In the first post of this series we noted:


People like to compare empires to other and older empires of history.

For example, some writers have been comparing the declining empire of the United States to the Roman Empire of old.

Mithraism was a well known religion of the Roman Empire, just prior to its final demise:


Mithraism ... was a mystery religion centered on the god Mithras, [which] became popular among the military in the Roman Empire, from the 1st to 4th centuries AD.

(Wikipedia, emphasis added). There is general agreement about that part of the history, the fact of Mithraism being a religion of soldiers and their commanders.


There is lots of debate on the origins of Mithraism, but as far as it went in the Roman Empire, where some scholars believe it originated (others do not) it clearly is a militaristic religion:

"Upon enlistment, the first act of a Roman soldier was to pledge obedience and devotion to the emperor. Absolute loyalty to authority and to fellow soldiers was the cardinal virtue, and the Mithraic religion became the ultimate vehicle for this fraternal obedience. The Mithras worshippers compared the practice of their religion to their military service."

This version of "Christianity" practiced by U.S. military religionists is far more like Roman Mithraism than was the religion the Christians were thrown to the lion's dens of Rome for practicing.

The religion which Emperor Constantine made the state religion of the Roman Empire, circa 300 AD, was called "Christianity", but it was Mithraism more than anything else.

(Doing the Right Thing - Mithraism, 4/6/2010, emphasis in original). There have been some criticisms leveled at some of the structural similarities between Mithraism and Christianity which Dredd Blog has pointed out:

4) Worshippers of Mithras held strong beliefs in a celestial heaven and an infernal hell (“The Bible speaks clearly of the existence of Heaven … Hell is also spoken of in the Bible, but its nature is even more sketchy. When Jesus described the destiny of sinners who refused to change their ways, he compared it to Gehenna, which was a rubbish dump outside Jerusalem. People in wretched poverty picked their way through it to find scraps, and fires burned”).

5) Worshippers of Mithras believed they would be given endless life (“For this corruptible must put on incorruption, and this mortal must put on immortality” I Cor 15:53).

6) Worshippers of Mithras believed in a final day of judgement in which the dead would resurrect (“But if it is preached that Christ has been raised from the dead, how can some of you say that there is no resurrection of the dead?” I Cor 15:12).

7) Worshippers of Mithras believed in a final conflict that would destroy the existing order of all things (“Then I saw the beast and the kings of the earth and their armies gathered together to make war against the rider on the horse and his army” Rev 19:19; “Then they gathered the kings together to the place that in Hebrew is called Armageddon” Rev 16:16).

8) Mithras worshippers believed that a ritualistic baptism was required of the faithful (“Then Jesus came to them and said, ‘All authority in heaven and on earth has been given to me. Therefore go and make disciples of all nations, baptizing them in the name of the Father and of the Son and of the Holy Spirit …’” Matthew 28:18-20).

9) Mithras worshippers took part in a ceremony in which they drank wine and ate bread to symbolize the body and blood of Mithras (“While they were eating, Jesus took bread, gave thanks and broke it, and gave it to his disciples, saying, ‘Take and eat; this is my body’” Matthew 26:26; “And he took a cup of wine and gave thanks to God for it. He gave it to them and said, “Each of you drink from it, for this is my blood, which confirms the covenant between God and his people. It is poured out as a sacrifice to forgive the sins of many” Matthew 26:26-28).

10) Mithras worshippers believed that Sundays were held sacred (“the majority observance of Christian Sabbath is as Sunday rest” - Wikipedia).

12) Mithras took part in a Last Supper with his companions before ascending to heaven (“The Last Supper is the final meal that, according to Christian belief, Jesus shared with his Apostles in Jerusalem before his crucifixion.” Wikipedia; “Men of Galilee,” they said, “why do you stand here looking into the sky? This same Jesus, who has been taken from you into heaven, will come back in the same way you have seen him go into heaven.” Acts 1:11).

(On The Origin of The Bully Religion). But what does separate the two religions, what shows they are entirely different at heart, is the practice of war vs. the practice of peace:


“Polybius claimed that the [Roman army] deliberately caused as much destruction as possible, slaughtering and dismembering animals as well as people, to deter other communities from resisting Roman demands to surrender; mercy. Male inhabitants were usually slaughtered, women raped, though only in exceptional circumstances killed in the initial orgy of destruction. After that, as tempers cooled and the desire for profit took over, prisoners would be taken for sale as slaves, though at times any considered to have a low market value, such as the very old, were still massacred.”
...
According to John Dear in his post this is what it was:


When the nonviolent Jesus was born two thousand years ago into abject poverty to homeless refugees on the outskirts of a brutal empire, the story goes that angels appeared in the sky to impoverished shepherds singing, "Glory to God in the highest and peace on earth!"

Peace was coming to the world! They were so excited, they couldn't contain themselves. 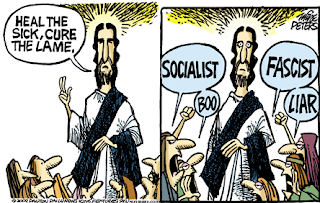 That's what Christmas is about -- the coming of "peace on earth."

That child grew up to become, in Gandhi's words, "the greatest nonviolent resister in the history of the world." Jesus taught peace, lived peace and blessed peacemakers. "My peace is my gift to you," he said. When we refused to learn "the things that make for peace," he broke down and wept. He took action to end systemic injustice, and he did it in a nonviolent way and, for his civil disobedience, he was brutally executed by the Roman Empire and died forgiving his killers.

(Christmas 'Peace on Earth' Means 'No More War'). Did you notice the last sentence containing "he was brutally executed by the Roman Empire", and did you read up-thread that Mithraism was the religion of the Roman soldiers who crucified Jesus?

(On The Origin of The Bully Religion, cf. Jonah Peace). Some of the twelve similarities are disputed among scholars in various degrees, but there are more than just twelve of them:


Over the centuries—in fact, from the earliest Christian times—Mithraism has been compared to Christianity, revealing numerous similarities between the two faiths' doctrines and traditions, including as concerns stories of their respective godmen. In developing this analysis, it should be kept in mind that elements from Roman, Armenian and Persian Mithraism are utilized, not as a whole ideology but as separate items that may have affected the creation of Christianity, whether directly through the mechanism of Mithraism or through another Pagan source within the Roman Empire and beyond. The evidence points to these motifs and elements being adopted into Christianity not as a whole from one source but singularly from many sources, including Mithraism.
...
Thus, the following list represents not a solidified mythos or narrative of one particular Mithra or form of the god as developed in one particular culture and era but, rather, a combination of them all for ease of reference as to any possible influences upon Christianity under the name of Mitra/Mithra/Mithras.

Mithra has the following in common with the Jesus character ...

(Truth Be Known - Mithra The Pagan Christ). At some point in time in the military the two were conflated, but the one that allows wars to replace peace is the one the military selected, like their forerunners in the Roman military, and they became a warmongering spiritual group:

(As We Go Marching, by John T. Flynn, 1944, page 222, emphasis added). If you read The Universal Smedley - 2 and Viva Egypt - 2 you will see how a supposed Christian belief about a battle of Armageddon is also a Mithraic tradition (see #7 in the list above).

It is the belief that got us into the addiction to Middle East oil and oil wars (see The Universal Smedley - 2).

The U.S. military is the world's number one single user of oil (Oil is Biggest Military Weakness).