Will The Military Become The Police? - 4 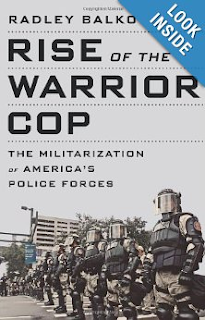 Of course the answers at this point are several: "yes. it will", "no, it won't", and "that already happened yesterday."

I suppose the bottom line is: "What If Your Country Begins to Change and No One Notices?".

In this series we have been discussing how the original Posse Comitatus Act (18 U.S.C. § 1385, passed at the end of The Civil War) is becoming quaint and faint (Will The Military Become The Police - 3).

Another related series on Dredd Blog discusses why the military must not be allowed to become the police under a propaganda contrived "martial law" declaration.

A quote from a Phoenix business magazine (which points out that the military already has detailed written plans to do so) underscores the clear and present danger to U.S. Liberty:

There, we watched military style tactics shut down an entire American city, with military type outfits going house to house military style, to supposedly find an alleged bomber, who was finally found by a single citizen when the storm troopers could not do so (The Boston Massacres).

Similar events are indications that the military is fast evolving into a national police outfit, spying on all Americans, and conducting military training and ops out in plain sight:


The city is providing support for routine military training exercises around the area.

This training happens across the country and is designed to ensure the military's ability to operate in urban environments, as service members meet mandatory training certification requirements ...

(Chicago Fox News). This is evidently taking place in other cities too:


Such operations are unquestionably of central importance to the US military. Over the past decade, its primary mission, as evidenced in Afghanistan and Iraq, has been the invasion and occupation of relatively powerless countries and the subjugation of their resisting populations, often in house-to-house fighting in urban centers.

The Army operates a 1,000 acre Urban Training Center in south-central Indiana that boasts over 1,500 “training structures” designed to simulate houses, schools, hospitals and factories. The center’s web site states that it “can be tailored to replicate both foreign and domestic scenarios.”

What does flying Blackhawks low over Chicago apartment buildings or rolling armored military convoys through the streets of St. Louis accomplish that cannot be achieved through the sprawling training center’s simulations? Last year alone, there were at least seven such exercises, including in Los Angeles, Chicago, Miami, Tampa, St. Louis, Minneapolis and Creeds, Virginia.

The most obvious answer is that these exercises accustom troops to operating in US cities, while desensitizing the American people to the domestic deployment of US military might.


Since the 1960s, in response to a range of perceived threats, law-enforcement agencies across the U.S., at every level of government, have been blurring the line between police officer and soldier. Driven by martial rhetoric and the availability of military-style equipment—from bayonets and M-16 rifles to armored personnel carriers—American police forces have often adopted a mind-set previously reserved for the battlefield. The war on drugs and, more recently, post-9/11 antiterrorism efforts have created a new figure on the U.S. scene: the warrior cop—armed to the teeth, ready to deal harshly with targeted wrongdoers, and a growing threat to familiar American liberties.

(WSJ). The author of the book depicted in the graphic at the top of this post gives a thorough presentation of the issue.