On The Origin of The Bully Religion - 2 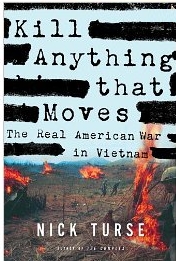 In the first post of this series Dredd Blog pointed out some of the likenesses and some of the differences between Christianity and Mithraism.

In today's post we will continue that theme, however, we will do so as we consider a new book about the Vietnam War.

The name of that new book is Kill Anything That Moves, which is a shocking revelation that departs from a lot of The Wartocracy's propaganda about that war, as well as being a departure from many other books about that war.

But it is similar to another recent book we have considered that has to do with U.S. History, albeit a book of a much more general sort concerning the beginning of the nation; similar in the sense that it offers a shocking contrast to the history most  of us have been taught and accept as the true history of our nation.

Interestingly, there are older books which offer the same shocking viewpoint; the viewpoint that tells us we have been habitually lied to for many generations, yes, older books that Dredd Blog has quoted from in prior posts:

(Myth Addiction Is Establishment's LSD - 3, quoting 1944 book). The fellow writing it was well versed, as was the professor, Bernard Bailyn, who we quoted recently concerning the history of our founding:


In theory, Bernard Bailyn should need no introduction. In actuality, the intellectual landscape is so fragmented that highly literate Americans may not know of this prolific Harvard historian, the recipient of two Pulitzers, a National Book Award, a National Humanities Medal and a Bancroft (the most important professional prize for American historians).

(The Barbarous Years, NY Times). We quoted him to show that our founding was more about drug cartels than it was about Bible thumping democracy lovers (A History of Oil Addiction - 4).

Read what Professor Bailyn said about our founding in that post if you want some historical shock.


The title is taken from an order given to the U.S. forces who slaughtered more than 500 Vietnamese civilians in the notorious My Lai massacre of 1968. Drawing on interviews in Vietnam and a trove of previously unknown U.S. government documents — including internal military investigations of alleged war crimes in Vietnam — Turse argues that U.S. atrocities in Vietnam were not just isolated incidents, but "the inevitable outcome of deliberate policies, dictated at the highest levels of the military."

(Democracy Now, emphasis added). Another unabashed, raw, to the point, and shocking review has this to say:


Americans have long been taught that events such as the notorious My Lai massacre were isolated incidents in the Vietnam War, carried out by "a few bad apples." But as award‑winning journalist and historian Nick Turse demonstrates in this groundbreaking investigation, violence against Vietnamese noncombatants was not at all exceptional during the conflict. Rather, it was pervasive and systematic, the predictable consequence of orders to "kill anything that moves."

Drawing on more than a decade of research in secret Pentagon files and extensive interviews with American veterans and Vietnamese survivors, Turse reveals for the first time how official policies resulted in millions of innocent civilians killed and wounded. In shocking detail, he lays out the workings of a military machine that made crimes in almost every major American combat unit all but inevitable.

(McMillian, emphasis added). A review asks another interesting question about the issue:


For half a century we have been arguing about “the Vietnam War.” Is it possible that we didn’t know what we were talking about? After all that has been written (some 30,000 books and counting), it scarcely seems possible, but such, it turns out, has literally been the case.

Now, in Kill Anything that Moves, Nick Turse has for the first time put together a comprehensive picture, written with mastery and dignity, of what American forces actually were doing in Vietnam. The findings disclose an almost unspeakable truth. Meticulously piecing together newly released classified information, court-martial records, Pentagon reports, and firsthand interviews in Vietnam and the United States, as well as contemporaneous press accounts and secondary literature, Turse discovers that episodes of devastation, murder, massacre, rape, and torture once considered isolated atrocities were in fact the norm, adding up to a continuous stream of atrocity, unfolding, year after year, throughout that country.

(How Did the Gates of Hell Open in Vietnam?, emphasis added). That book, which the author took over ten years to research, certainly dovetails with the Dredd Blog post about some of our "great" warmonger leaders:


Robert McNamara: I was on the island of Guam in his [General Curtis LeMays'] command in March 1945. In that single night, we burned to death one hundred thousand Japanese civilians in Tokyo. Men, women and children.

Interviewer: Were you aware this was going to happen?

Robert McNamara: Well, I was part of a mechanism that, in a sense, recommended it. [regarding his and Colonel Curtis LeMay's involvement in the bombing of Japan during World War II] LeMay said if we lost the war that we would have all been prosecuted as war criminals. And I think he's right. He ... and I'd say I ... were behaving as war criminals. LeMay recognized that what he was doing would be thought immoral if his side has lost. But what makes it immoral if you lose and not immoral if you win?

(Ayn Rand: Patron Saint of The Plutocracy - 3). The most peaceful and caring people of the Earth -- who ya gonna call -- the U.S.eh?

So, how does this tie in with the bully religion, with Mithraism faking itself as Christianity, you may be wondering.

Well, go back and read about one of the most famous military establishments in world history (until our Wartocracy made the scene), the Mithra-worshiping Roman Military:

(On The Origin of The Bully Religion, emphasis added). Meanwhile all those people fancying themselves as good, clean, sophisticated, and exceptional citizens of the greatest nation ever, tended not to want to hear anything besides the stories about the freedom and civil rights that their "warriors" were creating for them.

Because of course they, like The Universal Smedley, had Mithras God on their side.