The One Was Texas Medicine - 2 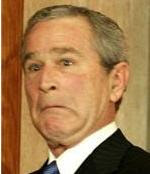 The Republican Primary debate last night reminded me of the photo to the left, and of the Bush II statement "childrens do learn", made in response to one of his rhetorical questions ("Is our children learning?") raised in one of his dissertations on education.

So, I thought it would be good to mix a little Texas Medicine with some Railroad Gin, like we did two years ago on this date when Poppy Bush I was chiding Maddow and Olbermann for chiding Bush II:
Did you hear that Poppy Bush I was unhappy with Rachel Maddow and Keith Olbermann?