Phase Five Of The Currency Wars? - 2 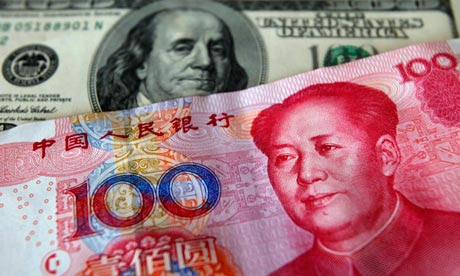 We have had a series on Dredd Blog which we have not touched upon much, if any, for over a year now.

The last post in this subject matter series "Phase Five Of The Currency Wars" touched upon the ongoing tidal ebb and flow in the oceans of national currency.

One of the concerns of US financial experts is the removal of the dollar as the "reserve currency" of the world:


The United States of America, if we didn't have the dollar as the de facto reserve currency of the world, we'd be Greece. I mean, we are broke, bankrupt. Really bankrupt.

(James Baker on GPS with F. Zakaria). James Baker was a former Secretary of the Treasury of the U.S.A. for Bush I.

Dredd Blog has been pointing out China's serious consideration of the problem and how their foreign policy has been forming like storm clouds on the horizon:


At least we should consider the words of some watch-dog types who have an ear to the economic ground and who say they hear thunder approaching:


China has ordered managers of its vast currency reserves to withdraw from risky dollar assets and retreat to core debt guaranteed by the US government, a clear sign that Beijing is battening down the hatches for fresh trouble on global markets.

(Phase Five Of The Currency Wars?). Economic heavyweights in China continue to talk about dumping the dollar:


The amount of foreign exchange reserves should be restricted to between 800 billion to 1.3 trillion U.S. dollars, Tang told a forum in Beijing, saying that the current reserve amount is too high.

Tang's remarks echoed the stance of Zhou Xiaochuan, governor of China's central bank, who said on Monday that China's foreign exchange reserves "exceed our reasonable requirement" and that the government should upgrade and diversify its foreign exchange management using the excessive reserves.

Meanwhile, Xia Bin, a member of the monetary policy committee of the central bank, said on Tuesday that 1 trillion U.S. dollars would be sufficient. He added that China should invest its foreign exchange reserves more strategically, using them to acquire resources and technology needed for the real economy.

(Xinhuanet). The speculation of some U.S. commentators is that this policy is going to become a serious event:


Once the push for broad Chinese currency acceptance is in play, the CNY and the USD will be unpegged, promptly followed by China dumping the bulk of its USD exposure, and also sending the world a message that US debt is no longer a viable investment opportunity. In fact, we are confident that the reval is a likely a key preceding step to any strategic decision vis-a-vis US FX exposure (read bond purchasing/selling intentions). As such, all those Americans pushing China to revalue, may want to consider that such an action could well guarantee hyperinflation, once the Fed is stuck as being the only buyer of US debt.

(China Dumping Dollars). Is it just alarmist talk, or should James Baker's words be taken seriously at this time?
Posted by Dredd at 6:14 AM