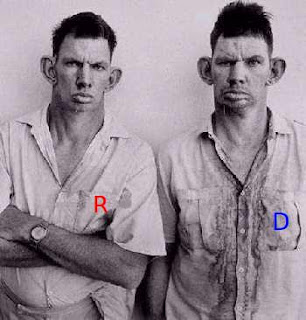 The evolution of politics in the USA is a study of microcosm / macrocosm dynamics.

In broad general terms it is the diagnosis of national decline, the symptoms easily comparable to a nasty couple ("R & D") dying of cancer, yet unwilling to help each other as they go down.

They have evolved to the "enlightened" place where they cling to the disease as their savior even as they blame each other for causing the problems the disease produces.

In short, they are "not taking their meds".

The Toxins of Power Blog gives some simple formulas listing antidotes ("the meds") or antitoxins to the disease toxins, but in a sicko society that system of cure has become anathema.

And so now, as a result of having passed the peak of sanity, we observe the budget wars soap opera, touted by some as the pinnacle of "democratic" ideology that has evolved within our society.

The script writers of this bad screenplay portray the enlightened debate as a struggle between taking more from the aged and feeble folk in society versus giving even more to the brute forces of MOMCOM.

The role the casting director MOMCOM has chosen for each party, and the scene the choreographer MOMCOM has framed, make the many of us ill, make others of us change the channel with denial, and make the rest of us angry or depressed.

One Dredd Blog theory for this, on the local scale, is that MOMCOM wants the populace to become so fed up that they are willing to embrace martial law as the solution.

"Nothing could be worse than this" will be famous last words if that happens.

UPDATE: Chris Martenson is giving an economic warning based on the impact the disaster in Japan will have on the world and US economy.

Add to that the impact the brats may bring to the US economy by shutting down the government, the recovery may get even harder to see (anyone seen it yet???).
Posted by Dredd at 6:34 AM