That oil spill commission has now confirmed what Dredd Blog was reporting before, during, and after the Deepwater Horizon catastrophe.

From this blog's perspective we saw, about a month before the disaster, that the Obama Administration had lost its way by using The W Compass.

This blog sounded the alarms the very day that Obama said he was going to open offshore waters to deep water drilling for oil.

Yes, we saw that The Obama Administration had become adrift in an ocean of oil baron propaganda, that the drift was going to lead to a bad place, and that Obama's saying "the technology is now mature and is now quite safe" did not make it so.

When the Deepwater Horizon disaster struck about a month later, following the president's boasting on behalf of big oil, we foresaw that the federal government would panic and then go into propaganda mode because it had egg all over its face and oil all over the states weakened most by Katrina. 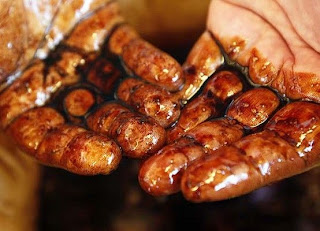 We gave a 65 million year history of disasters in the Gulf, kept up the pressure in the Danger Lurks In The Deep Water and Cleanup Begins In The Deep PR Waters.

Whew! that was a tiring span of time for all of us.

Now, it is being widely reported that the Oil Spill Commission is in general agreement with Dredd Blog on many of these issues.

So President Obama, are we really in good hands with the oil state?
Posted by Dredd at 9:07 AM