In the first post of this series, Corp Germ > Corp Seed > Corp Monster, Dredd Blog exposed the false notion of history which the neoCon Tea Baggers who use the term "free market" tend to have.

We noted that they are voracious practitioners of revisionist history so as to distort the writings, beliefs, and ideology of those historical figures they claim to be following.

In other Dredd Blog posts we equate these neoCon Tea Baggers to The Ferengi of Star Trek infamy.

Now that they have a majority of "brethren" on the Supreme Court they have decided to revolutionize, through what they claim to have disdain for - judicial activism, the constitutional law concerning The First Amendment. 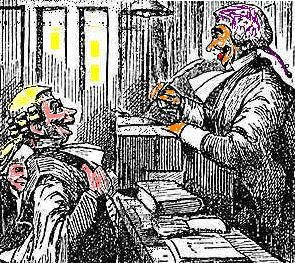 Not only that, in so doing, they have dabbled into The Separation of Powers Doctrine in as much as they have removed from Congress the right to regulate corporate campaign contributions.

The Ferengi have now been unleashed upon Wee The People.

From the cases The Supreme Five Ferengi are taking on, it looks like that revolution of First Amendment Law may continue for a while.

Like the guy spinning the roulette wheel says, "where she stops nobody knows".

The next post in this series is here.
Posted by Dredd at 7:45 AM