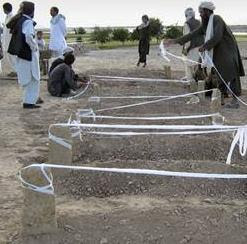 Daily Kos has a post about the WikiLeaks video showing U.S. soldiers murdering, in cold blood, some journalists and some children.

MOMCOM covered up the murders done by her "good guy troops" as long as she could, but the jig is up, because everyone can see through the fog of war deceit now.

MOMCOM then professed outrage, sadness, and incredulity that any U.S. soldier could ever in their wildest dreams do such a thing.

"Support the troops and don't worry about a very few bad apples" she cooed, "because we are all over here bringing you your freedom you would never otherwise have".

Some of the real U.S. soldiers in the unit that contains the soldiers who did the murders wrote open letters debunking MOMCOM's propaganda:

Josh Stieber was not at the scene of the shooting but says similar incidents happened throughout his 14-month tour; "The acts depicted in this video are everyday occurrences of this war."  Josh states that these casualties demonstrate the impact of U.S. military policy on both the civilians and the soldiers on the ground.

(Daily Kos, emphasis added). There is accord in an open letter which says they have been taught to do this:

We have been speaking to whoever will listen, telling them that what was shown in the Wikileaks video only begins to depict the suffering we have created. From our own experiences, and the experiences of other veterans we have talked to, we know that the acts depicted in this video are everyday occurrences of this war: this is the nature of how U.S.-led wars are carried out in this region.

(Letter To Iraq, emphasis added). I fear for those good and brave soldiers who leaked this for the benefit of their nation, and I hope for their safety.

Are we there yet ... the place where we have brought "democracy" to the heathen at the point of a gun with Bible verses on them?

The people of the United States are utterly unaware of the image the world has of us, and we are unaware because MOMCOM's little whores, who like to call themselves journalists, are out to make and keep you demented with their propaganda.

UPDATE: According to the military:

Troubling new data show there are an average of 950 suicide attempts each month by veterans who are receiving some type of treatment from the Veterans Affairs Department.

(Army Times). Perhaps deluding them into thinking they are going somewhere to do good things knowing they will find out otherwise is a failed policy?
Posted by Dredd at 3:50 PM