MOMCOM And The War With The Earth 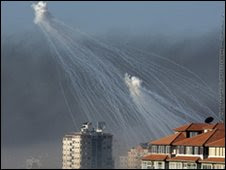 The Pentagon has released a report that has in it, among other things, an acknowledgement that global warming or global climate change is a reality.

So, it is not the "greatest hoax ever perpetrated on the American people" as one GOP senator has repeatedly said?

Assessments conducted by the intelligence community indicate that climate change could have significant geopolitical impacts around the world, contributing to poverty, environmental degradation, and the further weakening of fragile governments. Climate change will contribute to food and water scarcity, will increase the spread of disease, and may spur or exacerbate mass migration.

... DoD will need to adjust to the impacts of climate change on our facilities and military capabilities.

(Pentagon QDR, page 108 of PDF). Can you hear Senator Inhofe of Oklahoma whispering "say it ain't so" to the Pentagon?

Will the new neoCon script be like the "Don't Ask Don't Tell" (DADT) position of Senator McCain, who now says DADT is ok if the generals say it is ok?

Global warming is now real because the generals say it is real?

I am glad the generals and admirals realize a 30 foot rise in ocean level will have an impact on naval ports around the world; more impact than all the terrorists in the world will ever have.

One wonders if there will be tension now between MOMCOM factions, since the addiction to oil could be seen as a national security risk greater than the risk of political terrorism?
Posted by Dredd at 7:39 AM