If you are employed in the lovely Pentagonia, capital city of Bullshitistan, then your employment rates are going up as more and more soldiers and contractors with no-bid contracts are hired.

But if you live in the United States of America the opposite is true, because your unemployment rate is up to 10.2% now. 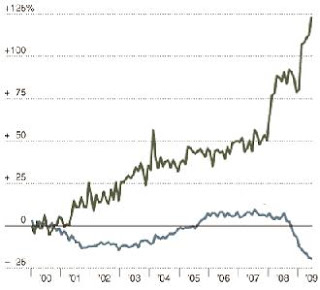 There is only so much theoretical money, so as one side goes up the other side goes down.

James Madison, the "Father of the United States Constitution", pointed out that war is our worst enemy.

Have you noticed that our enemy has been getting fat these daze? Two wars have been going for longer than World War I and World War II added together.

Get the hell out of Pentagonia, Bullshitistan, "propaganda capitol of the world", and get back home Jo Jo, get back home Loretta!!!
Posted by Dredd at 7:37 AM