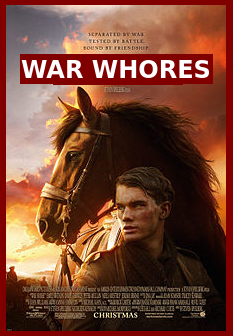 The "war is peace" trance is activating in the MSM.

The President, the Pope, and the Pentagon have said recently that global climate change is the greatest threat to national security (Blind Willie McTell News - 5).

Big Ed was going to do a thingy on the Gulf because of global warming (high in Australia today is 111F) induced climate change being more of a threat than terrorists (which made the amygdala of Ed's boss hog go hysterical).

So, War Whores, Spielberg's latest film (opens legs wide) is what the presstitute bosses at MSNBC are now doing instead (cf.  War is the Highway 61 of the 1%, Is War An Art or Is War A Disease?, The Goldilocks War Propaganda: Syria is Just Right, Another Spring of Whores of War).

Remember that their Johns invaded and destroyed Libya (MOMCOM And The Sins of Libya, 2) to bring it freedom (America’s Deadliest Export: Democracy), hence the mid-east curse "may the bushies bring you democracy."

Libya is the same country where the warmongers brought democracy and peace recently (before ISIS was created by propaganda and war); and it is that same place (except that now "it is all democratic and stuff") where ISIS is said to have just beheaded 25 Christians (which really pissed off General Jesus, a.k.a. "GJ", Hypothesis: The Cultural Amygdala - 4).

Other leg spreading sources are saying that the book about assholes (On The Origin of Assholes) is surging in sales in other countries that want their foggy streets to be heavily walked too (In the Fog of The Presstitutes, 2, 3).

GJ says those countries must wait in line, until after the peace generating bombing is done, before their souls get laid:

(Gun-Toting Jesus Will Lead 'Mighty Army', emphasis added). Of course, GJ added that "patience is a virtue, so don't despair 'cause we will virtue the hell out of you in due time."

The previous post in this series is here.
Sgt. Ed Shultz's alter ego converts a ho mobile into a democratic dirt saving 'chine to level stuff for freedom: