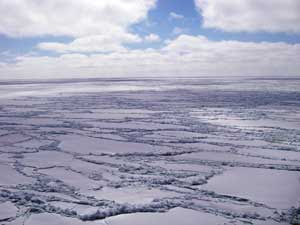 In the first post of this series I felt compelled to engage those who have been indoctrinated by Oil-Qaeda propaganda engines to the point that they have forgotten what they learned in Fifth Grade geometry.

Their minds are so damaged that they can no longer discern the meaning and difference between extent and volume.

That is, they have lost the fundamental ability to do the simple arithmetic for calculating and discerning the difference between square feet and cubic feet or square miles and cubic miles.

The people I am talking about have forgotten the formulas:

Nevertheless they spout off as if they had the power to change natural laws simply because they can change man-made laws:


A myth being used by deniers uses Antarctic ice extent to falsely say that Antarctic ice volume is increasing, which is false because it is impossible to determine volume using the formula for area, for extent, because when calculating area/extent one does not need to consider the thickness of the ice caps.

When competent scientists determined that in fact Antarctic ice volume has been decreasing for some time, they speak in terms of thickness of the ice cap when they are calculating the volume / amount of ice::


To map the changing thickness of almost all the floating ice shelves around Antarctica, the team used a time series of 4.5 million surface height measurements taken by a laser instrument mounted on ICESat from October 2003 to October 2008. They measured how the ice shelf height changed over time ...

Elementary kids ("do you know as much as a fifth grader") know this, but deniers either do not know it, or if they do then they are trying to deceive us:

(Tucson Citizen, emphasis added; see also this). These guys in the desert are trying to tell us that a low extent in the Arctic as well as a high extent in the Antarctic inform us of the volume, i.e. the amount of ice at both locations.

(How Fifth Graders Calculate Ice Volume). A follow up report uses language that may help those deniers grasp the geometry:


The Arctic sea ice expands during the Northern Hemisphere cold season, reaching a maximum areal extent in March, and then melts during the Northern Hemisphere warm season, reaching a minimum in September. In 2013, during the growth season, Arctic sea ice extent reached its annual maximum on 15 March at 15.13 million square kilometers according to the National Snow and Ice Data Center (NSIDC). This was approximately 0.5 million square kilometers below the 1981–2010 March annual maximum average and the sixth smallest maximum sea ice extent since satellite records began in 1979. During the entire 2012/13 growth season, Arctic sea ice extent grew by a record-large 11.7 million square kilometers. This growth can be explained by the large variation in the sea ice extent from the record small sea ice extent at the end the melt season in September 2012 to the large amounts of first-year ice forming through the growing season ending in March 2013. According to the University of Colorado-Boulder (USA), for the peak in March, ice four years of age and older has decreased from 18 per cent of the ice cover in 1984 to 3 per cent in 2013. In March 1984, 56 per cent of the peak ice pack was composed of first-year ice. In March 2013, first-year ice comprised 78 per cent of total ice cover. Overall, March Arctic sea ice extent is decreasing at an average rate of 2.6 per cent per decade.

(World Meteorological Organization, 2013, emphasis added). Arctic sea ice extent has to do with how large of a surface area in square kilometers, square feet, or square miles the ice covers, but it has absolutely nothing conclusive to do with how much volume of ice there is, because that value is expressed in cubic kilometers, cubic feet, or cubic miles.

Notice that I highlighted (in red) the word "areal" in the WMO report quote above.

Areal is a word that is associate with area, not volume:

(Dictionary, "Areal"; cf. Areal formula). The Tucson Citizen newspaper quoted above says global warming is false because the "extent" of the ice has increased.

They do not realize, as astute Fifth Graders would, that "extent" expresses area in square kilometers (km2), square feet (ft2), or square miles (mi2) rather than expressing volume in cubic kilometers (km3), cubic feet (ft3), or cubic miles (mi3), as the following table details:


Perhaps it would not be so bad if I was talking about Fifth Graders who learned some arithmetic then forgot it during the following summer break.

But it is egregiously bad because I am talking about adults who can severely damage our nation and our planet:


Over 56 percent — 131 members — of the current Republican caucus in the House of Representatives deny the basic tenets of climate science. 65 percent (30 members) of the Senate Republican caucus also deny climate change. What this means is that they have made public statements indicating that they question or reject that climate change is real, is happening, and is caused by human consumption of fossil fuels.

(Thank goodness we’re on top of this!, emphasis added). These people who govern in the legislative branch of government have been indoctrinated to the point their minds are actually damaged and not functioning sanely.

The military knows that the dementia of Republican congress members is quite dangerous (Will This Float Your Boat - 3, see video).