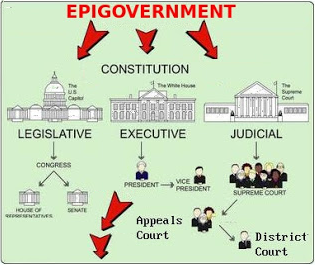 In this series which Dredd Blog began in December of 2012, an  attempt is made to set forth a hypothesis which explains some of the inexplicable conduct of "government." The hypothesis is that there is an Epigovernment which operates above the level of the visible offices of federal government.

That Epigovernment exerts various degrees of control and/or influence upon the direction and policy of the Executive, Legislative, and Judicial branches of what is traditionally considered to be "the government".

The graphic to the upper left (click to enlarge) shows an example diagram of the concept of Epigovernment, while the one below it (click to enlarge) shows a Worldwide Military Command structure ostensibly under the control of The Commander In Chief, who in the normal concept of governmental structure, controls the military as the chief or top commander.

The full description of Epigovernment shown in the top graphic is presented in the post Epigovernment: The New Model.

The full description of the Worldwide Military Command structure shown in the lower graphic above is fully described in the post The Virgin MOMCOM - 4.

Before we get into the nuts and bolts of today's post concerning what the nature of this situation is, let's set the stage for explaining the almost inexplicable reality we are going to discuss:


In terms of pure projectable power, there’s never been anything like it. Its military has divided the world -- the whole planet -- into six “commands.” Its fleet, with 11 aircraft carrier battle groups, rules the seas and has done so
largely unchallenged for almost seven decades. Its Air Force has ruled the global skies, and despite being almost continuously in action for years, hasn’t faced an enemy plane since 1991 or been seriously challenged anywhere since the early 1970s. Its fleet of drone aircraft has proven itself capable of targeting and killing suspected enemies in the backlands of the planet from Afghanistan and Pakistan to Yemen and Somalia with little regard for national boundaries, and none at all for the possibility of being shot down.  It funds and trains proxy armies on several continents and has complex aid and training relationships with militaries across the planet.  On hundreds of bases, some tiny and others the size of American towns, its soldiers garrison the globe from Italy to Australia, Honduras to Afghanistan, and on islands from Okinawa in the Pacific Ocean to Diego Garcia in the Indian Ocean.  Its weapons makers are the most advanced on Earth and dominate the global arms market.  Its nuclear weaponry in silos, on bombers, and on its fleet of submarines would be capable of destroying several planets the size of Earth.  Its system of spy satellites is unsurpassed and unchallenged.  Its intelligence services can listen in on the phone calls or read the emails of almost anyone in the world from top foreign leaders to obscure insurgents.  The CIA and its expanding paramilitary forces are capable of kidnapping people of interest just about anywhere from rural Macedonia to the streets of Rome and Tripoli.  For its many prisoners, it has set up (and dismantled) secret jails across the planet and on its naval vessels.  It spends more on its military than the next most powerful 13 states combined.  Add in the spending for its full national security state and it towers over any conceivable group of other nations.

In terms of advanced and unchallenged military power, there has been nothing like the U.S. armed forces since the Mongols swept across Eurasia.

(Why Washington Can’t Stop, Tom Engelhardt). Today we are going to fuse another Dredd Blog series "American Feudalism" into this mix, so as to explain this structure in terms of feudalism and neofeudalism, which do accurately portray the structure and dynamics of this never-happened-before worldwide apparatus:


Feudalism was the medieval model of government predating the birth of the modern nation-state. Feudal society is a military hierarchy in which a ruler or lord offers mounted fighters a fief (medieval beneficium), a unit of land to control in exchange for a military service. The individual who accepted this land became a vassal, and the man who granted the land become known as his liege or his lord. The deal was often sealed by swearing oaths on the Bible or on the relics of saints.
...
Feudalism was a political system which was dominant in Europe during the Middle Ages. First used in the 1600s, the term refers to a hierarchy of reciprocal military and legal obligations among the nobility. In simplified terms, a lesser noble (the vassal) would pledge his loyalty (fealty) to a higher noble (the lord) in exchange for land (a fief). In return, the vassal gave military service to the lord. As armies were expensive to raise and maintain, a lord was able to distribute the cost (in men and money) among his vassals.

(American Feudalism - 6). Before you wonder off thinking "how can that relate to the U.S. military", let's look at the Vassals who command the six fiefdoms (USNORTHCOM, USSOUTHCOM, USCENTCOM, USEUCOM, USAFRICOM and USPACOM) shown in the graphic at the beginning of the post:


Of the many facts that have come to light in the scandal involving former CIA director David H. Petraeus, among the most curious was that during his days as a four-star general, he was once escorted by 28 police motorcycles as he traveled from his Central Command headquarters in Tampa to socialite Jill Kelley’s mansion...

The commanders who lead the nation’s military services and those who oversee troops around the world enjoy an array of perquisites befitting a billionaire, including executive jets, palatial homes, drivers, security guards and aides to carry their bags, press their uniforms and track their schedules in 10-minute increments. Their food is prepared by gourmet chefs. If they want music with their dinner parties, their staff can summon a string quartet or a choir.

The elite regional commanders who preside over large swaths of the planet don’t have to settle for Gulfstream V jets. They each have a C-40, the military equivalent of a Boeing 737 ...


Serfdom is the status of peasants under feudalism, specifically relating to manorialism. It was a condition of bondage or modified slavery which developed primarily during the High Middle Ages in Europe and lasted in some countries until the mid-19th century.

Serfs who occupied a plot of land were required to work for the Lord of the Manor who owned that land, and in return were entitled to protection, justice and the right to exploit certain fields within the manor to maintain their own subsistence.
...
A freeman became a serf usually through force or necessity. Sometimes freeholders or allodial owners were intimidated into dependency by the greater physical and legal force of a local magnate. Often a few years of crop failure, a war, or brigandage might leave a person unable to make his own way. In such a case a bargain was struck with a lord of a manor. In exchange for protection, service was required, in cash, produce or labour, or a combination of all. These bargains were formalized in a ceremony known as "bondage" in which a serf placed his head in the lord's hands, akin to the ceremony of homage where a vassal placed his hands between those of his overlord.
...
To become a serf was a commitment that encompassed all aspects of the serf’s life.

Moreover, the condition of serfdom was inherited at birth. By taking on the duties of serfdom, serfs bound not only themselves but all of their future progeny.

(American Feudalism - 4). Serfs or citizens are given security and an occupation as their reward for loyalty to the King and Vassals, who bring them goods and services through the plunder of resources in the six command zones around the world:


General Carter Ham, the [USAFRICOM] commander for the Pentagon, admitted last week that the US had helped trained the Mali rebels, including Captain Amadou Sanogo, who led the military coup which overthrew Mali’s constitutionally-elected government.

In describing the statement Ham made at the Ralph Bunche center, Veterans Today editor Gordon Duff is highly critical of Ham’s support for widening US military involvement in the region, including the recent establishment of drone bases in Niger.

Duff is extremely concerned that the US lacks the intelligence resources in Africa to prevent the horrendous “collateral damage” nightmares drones have caused in Afghanistan, Pakistan and Yemen.

He goes on to describe Mali as a “domino” in a misguided and poorly thought out destabilization effort aimed at creating a generation of warfare.
...
Western multinational corporations’ attempts to cash in on the wealth of Congo’s resources have resulted in what many have called “Africa’s first world war,” claiming the lives of over 3 million people. The Democratic Republic of Congo (DRC) has been labeled “the richest patch of earth on the planet.” The valuable abundance of minerals and resources in the DRC has made it the target of attacks from U.S.-supported neighboring African countries Uganda and Rwanda.

The DRC is minerial rich with millions of tons of diamonds, copper, cobalt, zinc, manganese, uranium, niobium, and tantalum also known as coltan. Coltan has become an increasingly valuable resource to American corporations. Coltan is used to make mobile phones, night vision goggles, fiber optics, and capacitators used to maintain the electrical charge in computer chips. In December of 2000 the shortage of coltan was the main reason that the popular sale of the Sony Play Station 2 video game came to an abrupt halt.

The DRC holds 80% of the world’s coltan reserves, more than 60% of the world’s cobalt and is the world’s largest supplier of high-grade copper. With these minerals playing a major part in maintaining US military dominance and economic growth, minerals in the Congo are deemed vital US interests.

Historically, the U.S. government identified sources of materials in Third World countries, and then encouraged U.S. corporations to invest in and facilitate their production. Dating back to the mid-1960s, the U.S. government literally installed the dictatorship of Mobutu Sese Seko, which gave U.S. corporations access to the Congo’s minerals for more than 30 years. However, over the years Mobutu began to limit access by Western corporations, and to control the distribution of resources. In 1998, U.S. military-trained leaders of Rwanda and Uganda invaded the mineral-rich areas of the Congo. The invaders installed illegal colonial-style governments which continue to receive millions of dollars in arms and military training from the United States. Our government and a $5 million Citibank loan maintains the rebel presence in the Congo.

(Journalism: Facts vs. Fantasy). Thus, today's reality seems to fit together quite well as a typical feudal or neofeudal construct.

To learn the locations of the Epigovernment, and what it is composed of, read the four Dredd Blog posts "Epigovernment: The New Model" that precede this post.