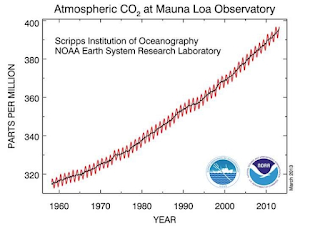 In this series we analyze and identify Oil-Qaeda.

The graph to the left, from NOAA, shows the increase within the atmosphere of the quantity of the green house gas we call carbon dioxide.

In the Dredd Blog posts Terrorism We Can Believe In? and Homeland Terrorism & Instability We Can Believe In? regular readers know that we noted the amazing fact that those who are some of the hands-on greatest killers of Americans are amongst those professionals who are said to affectionately adhere to the Hippocratic Oath.

The increase of poisons Oil-Qaeda consistently places into the portion of the Earth we are most intimate with on a second by second basis, the air we must breath every few seconds to stay alive, is also well-depicted by the graph above.

That upward march of the numbers of ourselves that our most trusted professionals kill year to year is both incessant and incompetent.

Is it rocket science to realize that the more poisons we breathe, eat, and drink equates to the more deaths that will result?

Is it rocket science to realize, then, that the Department of Energy is wrong when it says "Oil is the lifeblood of America’s economy", or is it common sense?

Economies suffer when the people report in sick, when weather catastrophes destroy property, and when valuable workers die.

So, as it is turning out year after year the actual truth of the matter on the ground is that Oil is the deathblood of America, of all other nations, of civilization, and of the Earth's living systems.

We have also pointed out that the sickness is evolving from acute to chronic, because a mentally ill desperation is setting in.

A sick desperation which is engendering the latest oil mythology that "getting off foreign oil" and using more "domestic oil" is in our best interests.

Thus, The State Department says, the Keystone Pipeline is the best thing that could happen to us, no matter what scientists or the laws say:


The Keystone XL pipeline, recently approved by the US State Department and awaiting President Obama’s declaration that it is in the “national interest,” will carry oil that is too dirty for the US government to buy — under legislation signed by George W. Bush!

In 2007, President Bush signed into law Section 526 of the Energy Independence and National Security Act of 2007. It prohibits the US government, which is the largest single fuel purchaser in the U.S., from using taxpayer dollars to purchase fuels that have a higher carbon footprint than conventional oil.

(Too Dirty Even for Bush II, cf. 42 USC § 17142). The fact that then Secretary of State Hillary Clinton was real cozy with lobbyists for the pipeline came up when she publicly said the pipeline to carry illegal oil should be approved (A Giant Cozy Pipeline).

There really is no such thing as "domestic oil" on the planet, because burning it and increasing the deadly green house effect is foreign to the Earth.

Switching to a different domestic drug dealer who has a more deadly foreign drug is not enlightened foreign or domestic policy.

Nor is it any way to kick a deadly habit (New Drug Dealer - Same Addiction).

It is becoming increasingly clear that the graph at the top of this post also tracks a steep increase of assholes who worm their way into Oil-Qaeda (On The Origin of Assholes).

Those are the real terrorists (We Killed More Of US Than They Did - 2) who are bringing mass death and destruction to this civilization:


More than 100 million people will die ... by 2030 if the world fails to tackle climate change, a report commissioned by 20 governments said on Wednesday.

As global average temperatures rise due to greenhouse gas emissions, the effects on the planet, such as melting ice caps, extreme weather, drought and rising sea levels, will threaten populations and livelihoods, said the report conducted by humanitarian organisation DARA.

It calculated that five million deaths occur each year from air pollution, hunger and disease as a result of climate change and carbon-intensive economies, and that toll would likely rise to six million a year by 2030 if current patterns of fossil fuel use continue.

"A combined climate-carbon crisis is estimated to claim 100 million lives between now and the end of the next decade," the report said.


America’s top military officer in charge of monitoring hostile actions by North Korea, escalating tensions between China and Japan, and a spike in computer attacks traced to China provides an unexpected answer when asked what is the biggest long-term security threat in the Pacific region: climate change.

Navy Admiral Samuel J. Locklear III, in an interview at a Cambridge hotel Friday after he met with scholars at Harvard and Tufts universities, said significant upheaval related to the warming planet “is probably the most likely thing that is going to happen ... that will cripple the security environment, probably more likely than the other scenarios we all often talk about.’’

“People are surprised sometimes,” he added, describing the reaction to his assessment. “You have the real potential here in the not-too-distant future of nations displaced by rising sea level. Certainly weather patterns are more severe than they have been in the past. We are on super typhoon 27 or 28 this year in the Western Pacific. The average is about 17.”

(The Boston Globe, emphasis added). You might also want to read the Dredd Blog post: Has The Navy Fallen For The Greatest Hoax?