A History of Oil Addiction - 4 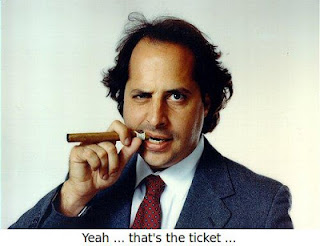 In today's post we will take a look at the wedding of the fossil fuel industry (Oil-Qaeda) to the propaganda industry (McTell News).

Regular readers know that thus far we have taken a very cursory look at the highlights of the evolution of Oil-Qaeda.

We know that it sunk its poisonous tentacles into government, into good businesses, and into a once free society in order to propagate itself -- not at all unlike a cancer -- seeing as how Oil-Qaeda is a drug peddler that promotes the addiction of the helpless and innocent.

We saw Oil-Qaeda attacking what it considered to be competitors, and literally eradicating other businesses, technologies, and systems that were actually better for civilization than Oil-Qaeda and its terribly addictive drugs.

What eventually gave Oil-Qaeda the power to perpetuate that maladjusted behavior, and what keeps it maladjusted now, is propaganda.

This was the icing on the toxic cake, following the wedding to the militaristic imperialism that allowed it to plunder the drug from other nations that did not have influence over powerful military forces that Oil-Qaeda has.

But when Oil-Qaeda became wedded to propaganda, that could have been the ultimate wrong, at least in the minds of some:


It is impossible to calculate the moral mischief, if I may so express it, that mental lying has produced in society. When a man has so far corrupted and prostituted the chastity of his mind, as to subscribe his professional belief to things he does not believe, he has prepared himself for the commission of every other crime. He takes up the trade of a priest for the sake of gain, and in order to qualify himself for that trade, he begins with a perjury. Can we conceive any thing more destructive to morality than this?

(Age of Reason, Thomas Paine). The "mental lying" of Paine's day is illustrated quite well by some interesting history:


Now comes “The Barbarous Years,” the next installment. It circles back to a period that most Americans don’t hear much about in school: the chaotic decades from the establishment of Jamestown (England’s first permanent colony in the Americas) in 1607 up to King Philip’s War (the vicious conflict that effectively expelled Indians from New England) in 1675-76. Bailyn’s goal is to show how a jumble of migrants, “low and high born,” sought “to recreate, if not to improve, in this remote and, to them, barbarous environment, the life they had known before.” As the title indicates, the story is as grim as it is fascinating: a group portrait in tones of greed, desperation and brutality. In recent years conservative writers dismayed by historical revisionism have flooded stores with books extolling the character and sagacity of America’s founders. “The Barbarous Years” is not one of them.

“Death was everywhere,” Bailyn writes of Jamestown. The colony was a commercial enterprise, started by the Virginia Company with the sort of careful financial evaluation that in the more recent past was the hallmark of the dot-com boom.

English people kept coming anyway, lured by a discovery that the Crown and company hated: tobacco. Hip, fun, disdained by stuffy authorities and wildly addictive, the smoking weed was an ideal consumer product. Thousands of migrants were willing to risk death for the chance to cash in on England’s squadrons of new nicotine junkies. The Chesapeake Bay became a barely governed swarm of semi-independent tobacco fiefs, owned by families, operated by squads of indentured servants, all squabbling with one another, Protestants against Catholics, English against other Europeans, everyone against Indians.

(The Barbarous Years, emphasis added). The addictions that founded the nation have grown up and are now "on steroids":


"The addiction to oil ... at least to the wealth and to the products made accessible to us by oil ... look at the negative consequences on the environment we are destroying the very Earth that we inhabit for the sake of that addiction. Now these addictions are far more devastating in the social consequences than the cocaine or heroin habits of my ... patients. Yet they are rewarded and considered to be respectable. The tobacco company executive that shows a higher profit will get a much bigger reward ... doesn't face any negative consequences legally or otherwise ... in fact is a respected member of the board of several other corporations ... but tobacco smoke related diseases kill 5.5 million people around the world every year. In the United States they kill 400,000 people a year".
...
"And these people are addicted to what? To profit, to such a degree are they addicted that they are actually in denial about the impact of their activities, which is typical for addicts, is denial. And that is the respectable one. It is respectable to be addicted to profit no matter what the cost. So what is acceptable and what is respectable is a highly arbitrary phenomenon in our society. And it seems like the greater the harm the more respectable the addiction" (Dr. Maté).

(The "It's In Your Genes" Myth). Yes, the massive propaganda industry has "cleaned" all that up with gloss and sharp turns to avoid actual history:

And one of the striking features of the modern period is the institutionalization of that process, so that we now have huge industries deceiving the public — and they're very conscious about it, the public relations industry. Interestingly, this developed in the freest countries—in Britain and the US — roughly around time of WWI, when it was recognized that enough freedom had been won that people could no longer be controlled by force. So modes of deception and manipulation had to be developed in order to keep them under control ..."

(The Deceit Business). Journalists use the term "spin" in place of "propaganda" now, but the person they call "The Father of Spin" wrote the book "Propaganda" at a time when he was proud to be the premier American propagandist:


The conscious and intelligent manipulation of the organized habits and opinions of the masses is an important element in democratic society. Those who manipulate this unseen mechanism of society constitute an invisible government which is the true ruling power of our country. We are governed, our minds are molded, our tastes formed, our ideas suggested, largely by men we have never heard of. This is a logical result of the way in which our democratic society is organized. Vast numbers of human beings must cooperate in this manner if they are to live together as a smoothly functioning society.

They govern us by their qualities of natural leadership, their ability to supply needed ideas and by their key position in the social structure. Whatever attitude one chooses to take toward this condition, it remains a fact that in almost every act of our daily lives, whether in the sphere of politics or business, in our social conduct or our ethical thinking, we are dominated by the relatively small number of persons — a trifling fraction of our hundred and twenty [now 320] million — who understand the mental processes and social patterns of the masses. It is they who pull the wires which control the public mind, who harness old social forces and contrive new ways to bind and guide the world ... It is the purpose of this book to explain the structure of the mechanism which controls the public mind, and to tell how it is manipulated by the special pleader who seeks to create public acceptance for a particular idea or commodity. It will attempt at the same time to find the due place in the modern democratic scheme for this new propaganda and to suggest its gradually evolving code of ethics and practice.