The assumptive Republican candidate, Willard "Mitt" Romney, was said to have dissed the Palestinian people by telling them that their culture was defective, at least when compared to Israeli culture.

The Romney Campaign seemed to double down on that when The Culture of Mitt also mentioned the difference between the U.S. compared to Mexico as a difference determined by culture.

That campaign, later on after they had travelled to Poland, replied with "Kiss my ass. This is a holy site" when that campaign was asked, by main stream media reporters, about those "cultural statements" Romney had made in Israel.

Those cultural statements made by Romneydom evince the cultural concepts of the Ayn Rand meme complex:


"Reciprocity is where Ayn Rand's brand of libertarianism fails the fairness test. Indeed, such terms as "fairness" and "social justice" are not even a part of her lexicon. It's a fatally defective philosophy."

(Psychology Today). That piece also points out that Warren Buffet does not agree with the elitist philosophy of Ayn Rand, the patron saint of the Plutocracy.

Dredd Blog had discussed Randian concepts in the first post of this series:


In yesterday's post we looked at the high number of psychopaths on Wall Street, and elsewhere, so today we will refine the data down to show more of that psychopathology, which is now embedded within the ideals that converted the constitutional republic with a middle-class oriented economy, into a Plutocracy running a Plutonomy.

One source we will use to help identify the ideology of the plutocrats is Ayn Rand, whose ideas are aptly described by a fellow across the pond, one George Monbiot.

Mr. George Monbiot had some succinct observations recently, which I will pass along in today's post:


Her psychopathic ideas made billionaires feel like victims and turned millions of followers into their doormats ...

It has a fair claim to be the ugliest philosophy the postwar world has produced. Selfishness, it contends, is good, altruism evil, empathy and compassion are irrational and destructive. The poor deserve to die; the rich deserve unmediated power. It has already been tested, and has failed spectacularly and catastrophically. Yet the belief system constructed by Ayn Rand, who died 30 years ago today, has never been more popular or influential.

Rand was a Russian from a prosperous family who emigrated to the United States. Through her novels (such as Atlas Shrugged) and her nonfiction (such as The Virtue of Selfishness) she explained a philosophy she called Objectivism. This holds that the only moral course is pure self-interest. We owe nothing, she insists, to anyone, even to members of our own families. She described the poor and weak as "refuse" and "parasites", and excoriated anyone seeking to assist them. Apart from the police, the courts and the armed forces, there should be no role for government: no social security, no public health or education, no public infrastructure or transport, no fire service, no regulations, no income tax.
...
Prosperity theology (sometimes referred to as the prosperity gospel or the health and wealth gospel) is a Christian religious doctrine which claims the Bible teaches that financial blessing is the will of God for Christians.
...
The doctrine emphasizes the importance of personal empowerment, proposing that it is God's will for his people to be happy. The atonement (reconciliation with God) is interpreted to include the alleviation of sickness and poverty, which are viewed as curses to be broken by faith.

(Prosperity Theology, emphasis added). This is why billionaires of the 1% fund these types of movements, which are composed of religious zealots who have mystical beliefs about "economy", therefore are not able to recognize the difference between plutonomy and economy.

(Ayn Rand: Patron Saint of The Plutocracy). One has to wonder if that 1% psychopathic charm is the reason the Romney campaign is trailing 6% or more in Ohio, Pennsylvania, and Florida?


Later at the Wailing Wall: 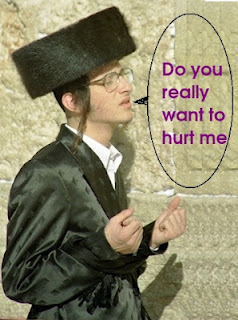