The Chamber of Corruption - 5 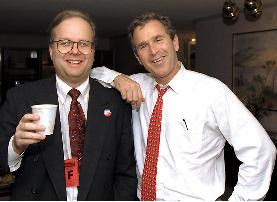 In the previous post of this series we focused on a corrupt institution at its face value.

In other posts we have gone down into the inner workings, all the way to the amygdala, then down even deeper, using the microscope of hypothesis and research, all the way down to the single cell level, then finally even further down than that.

Today, however, we are coming back up to the face, to once again gaze into the eyes of corruption, to gaze into the fog of dementia, by observing the whole face of it once again:


To begin with, when "reality" is converted into play pretend by demented officials, through "spin" or propaganda, State Crimes Against Democracy is the driving force those deranged authoritarians call "reality":


''We're an empire now, and when we act, we create our own reality. And while you're studying that reality -- judiciously, as you will -- we'll act again, creating other new realities, which you can study too, and that's how things will sort out. We're history's actors . . . and you, all of you, will be left to just study what we do.''

(Karl Christian Rove). Musicians, poets, and other artists capture this demented essence sometimes, then put it into words wrapped in music that captures the reality in a memorable way:

(Dumb & Dumber -> Bleak & Bleeker). The Bush II mentor Karl Christian Rove infamously said on the record that reality based thinking is history, and that instead "we" now make it up as we go ("we create our own reality ... we'll act again, creating other new realities ... all of you, will be left to just study what we do").

On the face of it, we have now isolated corruption to the childish, play pretend cognition of politicians who are intoxicated by the toxins of power:


The conscious and intelligent manipulation of the organized habits and opinions of the masses is an important element in democratic society. Those who manipulate this unseen mechanism of society constitute an invisible government which is the true ruling power of our country. We are governed, our minds are molded, our tastes formed, our ideas suggested, largely by men we have never heard of. This is a logical result of the way in which our democratic society is organized.

(The Ways of Bernays, emphasis added). In the eyes of the 1% elite of the plutocracy, the 99% are not capable of managing themselves, so they do it for to us, charging a fee of course.

A journalist mapped out some recent dynamics of that methodology in Moyers - The Nation, focusing on the path of The Powell Manifesto.

Meanwhile the Chamber CEO gets 4.7 million for taking such good care of business, because that is the way it is when indoctrination is enlightenment.

The previous post in this series is here.
Obama heckled but he does not respond with pepper spray or any other form of oppression: