There Our Flag Was Still 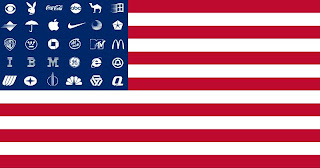 The flag to the left is called the "American Corporate Flag".

It would be just as accurate to call it the flag of The American Plutonomy.

Regular readers here know that Dredd Blog began to talk about the plutonomy, using that word for the first time, a little over a year ago:

The data may be a further sign that the U.S. is becoming a Plutonomy – an economy dependent on the spending and investing of the wealthy. And Plutonomies are far less stable than economies built on more evenly distributed income and mass consumption. “I don’t think it’s healthy for the economy to be so dependent on the top 2% of the income distribution,” Mr. Zandi said. He added that, “In the near term it highlights the fragility of the recovery.”

(The Graphs of Wrath, quoting the Wall Street Journal). Our most recent post concerning the plutonomy was last Friday in the post Wee The People, where the prediction was made that we have evolved into our final economic format here within "The American Republic", and that final economic format is a plutonomy.

I should explain that what Dredd Blog means by "final format" is that the people no longer have coherent force with which to hold "the powers that be" accountable.

Therefore, American citizens must simply ride out the storm of plutonomy (like we did this year with the hurricanes, tropical deluge, floods, tornadoes, droughts, and wild fires) then clean up anything that remains after the storm has stormed itself out.

The view which Dredd Blog expressed in that post is contrary to the more optimistic view expressed by Karl Marx as well as American economists and activists, who see the recent protests and demonstrations on Wall Street as one means of solving the problem.

Of course Dredd Blog loves it when we Americans express ourselves by demonstrations, but Dredd Blog also knows that we Americans are not so exceptional that there is no time in our history where the phrase "too little and too late" does not apply.
In the following short video, Bill Moyers addresses the concept of a plutocracy and/or a plutonomy: