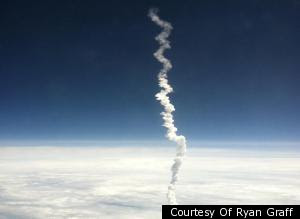 The photo to the left is a photo of the final space shuttle trail taken a few minutes after take off.

This photo shows what human civilization's space efforts look like from a fairly close proximity.

Another photo of the Earth, below, shows what that same civilization's space effort looks like from further out in space. 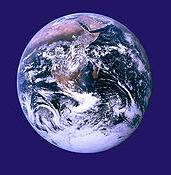 Clearly, the effort of human civilization to develop space travel, up to this point, does not show up at all from further away in space.

There are a couple of additional photos, below, which show strange structures in space.

They naturally inspire some scientists and amateurs alike to wonder if we are taking photos of the results of engineering efforts by other civilizations out in the deep cosmos.

If so, these would be civilizations that existed long ago, in the sense that the light reaching the cameras that took those photos left those civilizations millions of years ago.

Which begs the question, "if these are photos of civilizations 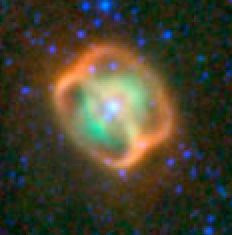 that did exist millions of years ago, do those civilizations still exist now?"

Some also wonder how long into the future our own human civilization, which can't be seen from deep space yet, will exist.

It is interesting to note that these odd shaped structures in these two photos were predicted by scientists well before we ever photographed them.

Well before the mystery of their shapes sent the anti-SETI people scrambling for rhetoric to support their fear of aliens, a fear that has engendered their cosmic theories which hold that human civilization on this little planet Earth is the only civilization that exists anywhere in the vast cosmos around us.

The visionary scientists, who predicted these strange shapes before we had these photos, realized that any civilization that was to become exceptionally advanced would have to find a permanent source of abundant, clean energy in order to continue to survive in an advanced state. 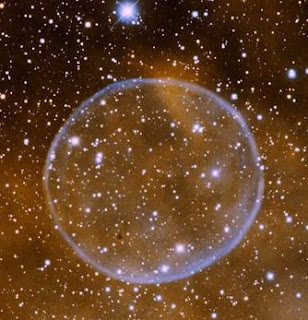 isible for millions of light years distance in space from those sources.

One of them, Freeman Dyson, predicted the bubble shaped entity that was photographed in the Cygnus region of the night sky.

If they had advanced to the point we could see their efforts, surely they were also experiencing cosmic sanity don't you think?

If not, then we can conclude that they did not pass "The Test", so they no longer exist, at least in the advanced stage required to proceed further into cosmic adulthood.