The photo to the left is a wedding photo of a newly wed whose husband adores her.

He says he is looking past the outside to the inside where there is a wonderful person dwelling.

In The Virgin MOMCOM - 2 we point out that MOMCOM replicates, that is, does not use "normal" reproductive ways and means like the virgin woman in the photo will.

In The Virgin MOMCOM, we began to use a metaphorical technique which we now use for analysis of the broad picture of US government.

We get behind the front, and look inside via the Jabber The Whut? metaphor in another post.

In those two series we show the broad and broader (dumb and dumber) aspects of government, of MOMCOM,

We likewise show that along with a narcissistic, Baghdad Bob bent, government only sees itself in its own propaganda's "exceptionalist" mirror device. 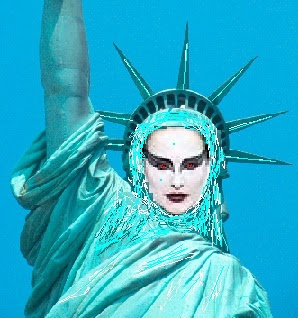 As an example, on Morning Joe on MSNBC today Joe stated that "we spend more per capita on education" than any other comparable nation.

The stealth narcissism within that statement comes into play when we remember that the military portion of MOMCOM is so sacred, in the government's view, that even the Department of Education has SWAT teams who break down the doors of those students who don't repay student loans:


The Department of Education is disputing a local news report that it sent a S.W.A.T. team to knock down the door and search the house of an individual because he defaulted on student loans.

Stockton, Calif. resident Kenneth Wright told the local ABC affiliate that on Tuesday, approximately 15 officers stormed into his home at 6 a.m., placed him in handcuffs and kept him in a squad car for nearly six hours while his three young children remained inside the house.

Wright said one of the individuals grabbed him by the neck and led him outside to his front lawn.

"He had his knee on my back and I had no idea why they were there," Wright said.

The initial report said the U.S. Department of Education "issued the search and called in the S.W.A.T for his wife's defaulted student loans," although that story has since been taken down and replaced with an updated version that did not contain the claim about the raid being connected to student loans.

(Educational SWAT Team). Do we consider SWAT team costs "educational" or is that part of The Keystone Komplex?

If we conflate "das homeland sekurity" costs with educational costs, then we are not being honest about what we spend on education, nor honest about the results.

What is wrong with this picture of an utterly piercing attitude, invading and piercing the sovereignty of other countries, as well as invading the homes of Americans over a late payment?

The USA sees its foreign policy one way, the nations of the world see it another way.

The toxins of power induced narcissism of this magnitude leads to national dementia, and a demise of the empire.

The next post in this series is here, the previous post is here.
Posted by Dredd at 5:51 AM