The States of War Budgets - 4 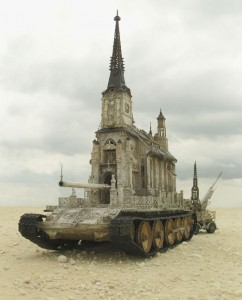 In this series we have been taking a serious look at the reality that imperialistic warmongering is bringing to the world, and to the nation at home.

We have stated several times that the USA spends more on militarism than all the rest of the nations combined.

People believe that or not based upon their concept of "militarism".

Some do not realize that "militarism" includes not only wars, it includes spy ops, psychological ops, propaganda networks, tax breaks for the weapons industry, a war college system, and campaign financing at home and abroad where the military needs to "grease the palms" of "patriotic" politicians.

Any resource exerted toward advancing the warmonger effort is a part of the vast system of militarism, including preparations for detainment camps when the American people get all roguish and mavericky like the Egyptians:


A new report by the U.S. Army War College talks about the possib

ility of Pentagon resources and troops being used should the economic crisis lead to civil unrest, such as protests against businesses and government or runs on beleaguered banks.

(The Government of the Government). The grotesquely misnamed "Homeland Security" is part and parcel of those expenditures.

For another example, we have pointed out that there are more people in military marching bands goose stepping to warmonger tunes than there are employees in the State Department employed for the purpose of advancing pro-American diplomatic interactions in the world around us.

A world that we increasingly invade, destabilize, and otherwise offend.

Dredd Blog is not the only place that makes the assertion that we spend more on militarism than the rest of the world combined:

every other nation on the planet combined, a situation without precedent in modern history.

The Pentagon presently spends more in constant dollars than it did at any time during the Cold War -- this despite the absence of anything remotely approximating what national security experts like to call a “peer competitor.” Evil Empire? It exists only in the fevered imaginations of those who quiver at the prospect of China adding a rust-bucket Russian aircraft carrier to its fleet or who take seriously the ravings of radical Islamists promising from deep inside their caves to unite the Umma in a new caliphate.

(Andrew Bacevich, Huffington Post). The exceptionalist's addiction to what they perceive to be the glory of all this escapes many people, perhaps even the majority.
Posted by Dredd at 4:23 AM