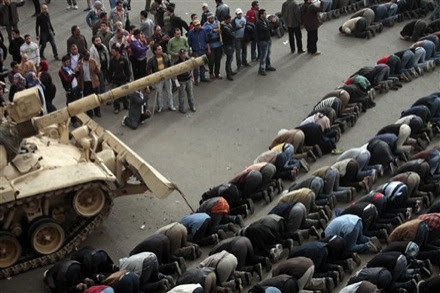 This is an email from the good folks over at MoveOn organization.

I see that The Virgin MOMCOM is getting all rogue and mavericky over in pyramid land.

Massive pro-democracy protests are spreading quickly across Egypt. Protesters are bravely speaking out against a repressive regime that has ruled the country for more than 30 years. The protesters are demanding the right to free speech, an end to government corruption and brutality, and free and fair elections. Link

Today we're joining an international grassroots movement to send a message of solidarity via radio and television to the people of Egypt and the Arab world.

So far, the protests have been overwhelmingly non-violent but the Egyptian government is cracking down hard. They have already arrested nearly a thousand protesters, declared a nationwide curfew, and cut off the internet. (Link) The regional media is one of our last ways to reach out to the people of Egypt.

So we're joining with our friends at Avaaz.org — an international MoveOn-style organization—to build a massive wave of support from people around the world to stand in solidarity with non-violent protesters in Egypt.

Avaaz will be spreading the statement of solidarity via radio and television across North Africa and the Middle East, where the Egyptian people can hear it.

You can join by signing the solidarity statement here: Move On

We enjoy the rights to free speech and peaceful assembly in this country, and we ought to use them to support others who hope for the same freedoms.

We must support those in Egypt who are choosing to stand up for democracy. The response by the Egyptian government has been needlessly brutal so far. Security forces are firing at protesters with live ammunition, beating people on the streets, and cutting off nearly every means of communication in an effort to maintain control and suppress the calls for democracy.

The situation on the ground is volatile and our hope is to support those in Egypt who are choosing peaceful protest as the means by which to push for change.

Our show of support could help not only bring newfound freedom to Egypt but possibly catalyze a chain reaction of reform across the Middle East unlike anything we've seen since the fall of the Berlin Wall.

Last week the people of Tunisia peacefully deposed a long-ruling dictator, inspiring the people of Egypt to stand up. Now, calls for reform are spreading to other countries including Yemen, Jordan, and Lebanon.

Right now our voices, in a show of unwavering solidarity with people non-violently calling for change, could potentially help bring fundamental human rights and democracy to millions of people. Add your name to the global statement of solidarity to be broadcast by radio here: Link


Thanks for all you do.

–Justin, Robin, Duncan, Peter, and the rest of the team

1."Egyptians' Fury Has Smoldered Beneath the Surface for Decades," The New York Times, January 28, 2011

Thankfully there are some "original Americans" still in the world who resist the "advancements" of MOMCOM, if you know what I mean.

The next post in this series is here.
Posted by Dredd at 6:39 PM