In the first episode of this series we talked about the ancient origin of leeks.

Oh those leeks, we discovered, are such good food for the people, but they are a poison for the elites, they are a risk to the warmonger, but above all they are for sure a perplexing problem to those vexed with the fog of nationalism that is founded on the exceptionalism of foolishness.

Those on the right, who feign "pragmatic constitutional understanding" when confronted with the Fourth Amendment, tend to say: "I have nothing to hide, so why should I care if 'they' search me or mine without a warrant ... I mean c'mon ... only criminals fear to be searched, besides it makes us safe and secure to give up the Fourth Amendment."

But those who officially preach that doctrine to the sleepy minions (e.g. T-Baggers) become hostile and vain when they are searched without a "warrant" by the CIA (Cosmic Intelligent Agents) of the people, and then have to "feast on leeks" when the rank lies and propaganda are exposed.

All of a sudden, they have no use for WiggyLeeks, the food of the common folk.

They become national security wonks all of a sudden when the tides turn upon them, failing to realize that a rogue government is not something that is safe and secure in the first place.

Why doesn't it occur to them that if those sworn not to do what they don't want out in the open didn't do those bad things they would have nothing to worry about?

Those who indoctrinated those lizard brain controlled minions tend to wilt like a leek in the desert without water when they have to endure violations of the principles of that "quaint writ" (Gonzales) because of the emergence of the truth about them.

Well, it is so close to thanksgiving time that we need to talk about that constitutional food of the people, the leeks of the people, from now until Pentagonia, Capitol of Bullshitistan is a democracy again.

After that we will celebrate the new era with some champagne and rejoicing while we sing "long live the leeks and long live the people".

As it turns out, a couple of media newspapers are leek eaters: 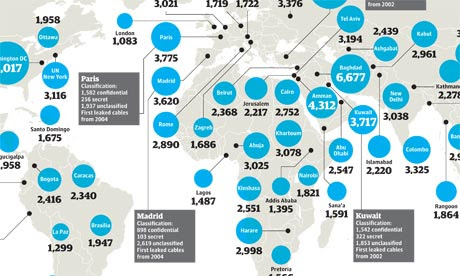 "... cables date from 2007 or later — show American officials struggling with events whose outcomes are far from sure. To read through them is to become a global voyeur, immersed in the jawboning, inducements and penalties the United States wields in trying to have its way with a recalcitrant world."

(Guardian, see also NY Times). Now go out into the garden, pick some leeks, and "boil them cabbage down" (the Guardian has a download mechanism).

We must not DeLay the rights of the people, we must resist the robber barons and the criminally insane, so that we preserve at least a chance that we or our children can dwell in the next civilization.

The next post in this series is here, the previous post is here.
Posted by Dredd at 4:01 AM

Email ThisBlogThis!Share to TwitterShare to FacebookShare to Pinterest
Labels: Rules