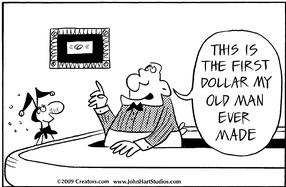 WEEKEND GUEST POST by Todd PalinOne of the great mysteries of my deeply religious life concerns one of the elixirs of life, beer.

I am quite certain, after a decade of deep and lasting research, that beer did not originate at my favorite "Kroger Grocery Store" (depicted in the Wizard of Id cartoon in this post), where I go when the deep, mysterious, but ever present thirst of an ancient blogger manifests itself in my psyche as an equally compelling thirst for Bud Lite.

You probably have noticed, as I have, that some of the Dredd Blog links are to ancient writings which we now call the Bible, the Koran, the Vedas, etc., where I have avidly searched for the answer to this ancient riddle of things Sarah says about me, while imbibing the ancient liquid of the campaign trail lite of life.

I recently had a eureka moment which I need to share with you.

It happened while I was reading an article that may just have satisfied a part of my thirst for election knowledge as well:

Enkidu does not know of eating food; of beer [šikaram] to drink he has not been taught. The prostitute opened her mouth. She said to Enkidu, “Eat the food Enkidu, [it is] the luster of life. Drink the beer as is done in this land.” Enkidu ate the food until he was sated; of the beer he drank seven cups. His soul became free and cheerful, his heart rejoiced, his face glowed. He rubbed ... his hairy body. He anointed himself with oil. He became human.

(Did The Ancient Israelites Drink Beer?). There are moments in life when we reach the "Enkidu moment", a short span of time when the lite shines through:

Ancient Israelites, with the possible exception of a few teetotaling Nazirites and their moms, proudly drank beer — and lots of it. Men, women and even children of all social classes drank it. Its consumption in ancient Israel was encouraged, sanctioned and intimately linked with their religion. Even Yahweh, according to the Hebrew Bible, consumed at least half a hin of beer (approximately 2 liters, or a six-pack) per day through the cultic ritual of libation, and he drank even more on the Sabbath ... 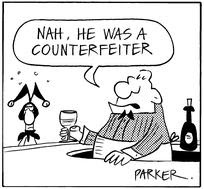 Well, that does explain a lot of my religious experience, but still the question lingers: "why aren't most of my friends, fundamentalist evangelicals, human, like Enkidu was?"

If we win the case against the Fed we will find out many mysteries just before the next to last election, which some say is the upcoming election.

If you do so, you will be sent information that will explain the reason for my tazer luv for my Sarah Sarah.