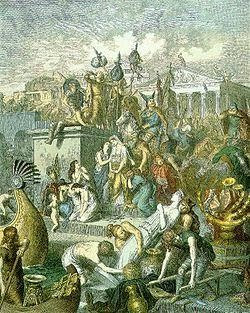 In the first post of this series we focused on the peak oil / global warming dichotomy.

Focusing on climate, we noted that the use of hydrocarbons (oil, gas, coal) was putting strains on supply as peak oil comes into play.

At the same time we noted that climate changes caused by the use of those hydrocarbons is also having political and military impact on the nations.

As weather catastrophes of various sorts are being indiscriminately unleashed and as they increase, these tensions will also increase.

In the peak oil wars series we focused on tensions between nations now trying to gain control of the supply of hydrocarbons, through various methods (including war), as peak oil settles in, rendering hydrocarbons more and more rare.

Ultimately these issues impact trade intercourse among all nations of the world, which we call civilization.

The growing tension will affect the relationships of the larger, more influential nations first, in terms of growing conflict, struggle, and the resulting dangers of trade wars or even shooting wars.

Dredd Blog had a series of posts dealing with currency because we already saw the tension in relationships approaching.

For evidence of the reality of these tensions, take as an example yesterday's 348-79 vote in the U.S. House of Representatives to sanction China for what the U.S. government sees as trade agreement violations:


The House has approved legislation that would allow the U.S. to seek trade sanctions against China and other nations for manipulating their currency to gain trade advantages.

The 348-79 vote Wednesday sends the measure to the Senate,

where its prospects are unclear. Senate supporters hope to get a vote on a similar proposal after Congress returns following the November congressional elections.

Supporters said the bill would allow the Obama administration to pressure China on an issue that they say has led to the loss of more than 2 million manufacturing jobs in the U.S. over the past decade.

(Huffington Post). That legislative ploy appears to be heading in an unfruitful direction, because China may have us over a barrel because of financial as well as resource advantages:


The U.S. handed its main economic rival power to dictate access to these building blocks of modern weapons by ceding control of prices and supply, according to dozens of interviews with industry executives, congressional leaders and policy experts. China in July reduced rare-earth export quotas for the rest of the year by 72 percent, sending prices up more than sixfold for some elements. 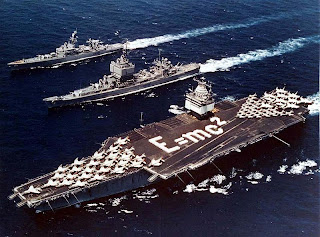 Military officials are only now conducting an inventory of where and how U.S. suppliers use the obscure but essential substances -- including those that silence the whoosh of Boeing Co. helicopter blades, direct Raytheon Co. missiles and target guns in General Dynamics Corp. tanks.

“The Pentagon has been incredibly negligent,” said Peter Leitner, who was a senior strategic trade adviser at the Defense Department from 1986 to 2007. “There are plenty of early warning signs that China will use its leverage over these materials as a weapon.”

(Business Week). It seems that military planners do not anticipate the consequences of some of these tensions seething below the surface:


Pakistan blocked a vital supply route for U.S. and NATO troops in Afghanistan on Thursday in apparent retaliation for an alleged cross-border helicopter strike by the coalition that killed three Pakistani frontier troops.

The blockade appeared to be a major escalation in tensions between Pakistan and the United States.

A permanent stoppage of supply trucks would place massive strains on the relationship between the two countries and hurt the Afghan war effort. Even a short halt is a reminder of the leverage Pakistan has over the United States at a crucial time in the 9-year-old war.

(Raw Story). Some of these problems are contributed to by the feeling of exceptionalism the military is accustomed to.

We can conclude that the effects of the growing strain, caused by this tension, is not limited to currency, because in a beginning or embryonic form, we see indications of growing tension in multiple ways on several fronts.

Evidently the convoy of trucks (fuel tankers) that had been blocked by the Pakistani authorities (not permitted to cross the border into Afghanistan from Pakistan) was torched and destroyed by opposing forces while waiting to cross the border.

The next post in this series is here, the previous post is here.
Posted by Dredd at 6:41 AM