Danger Lurks In The Deep Water - 3 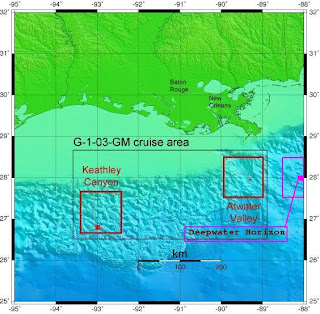 In this series we have been discussing the hydrate-caused mine field conditions on the seabed and the loop current in the Gulf of Mexico (GOM).

In the first post we noted that Atwater Valley, located in the Eastern Gulf in the middle of the geologic feature called the Mississippi Canyon, had a strong "loop current" in 2002-2004 when exploration was done.

An article in Wikipedia indicates that there have been various theories about an eddy or two that spin off the loop current, extending it randomly and/or cyclically over the years.

That article focuses on surface matters, however, the study we cited to discussed strong currents near the seabed.

If the loop current is still where it was in 2002-2004 it is most likely that the oil and hydrates have been taken into the current, which means that dispersant chemicals, oil, and methane have been carried by the loop current down around the southern tip of Florida and into the Atlantic, probably from close to day one.

If so, these toxins being identified by scientists, will already be present to some degree in the Gulf Stream that flows North-east toward Europe, that is, much earlier than indicated by the federal government so far.

Notice how strong the currents are as far north as the Deepwater Horizon latitude:


Weather was generally excellent, with only one minor squall during the 35-day JIP cruise. The main problem was currents in the Atwater Valley location, which ran consistently 2-3 knots at the surface with subsurface effects felt down to about 1000 feet. The ship had no working current meter, and the strong loop current created problems for the Uncle John in holding position, causing thruster loads frequently above critical redundancy levels. Subsurface currents caused the drill pipe to drift at an angle beneath the vessel and created difficulties in tripping the pipe. A total of nine hours of downtime were attributed to problems created by currents.

(Cruise Report, p. 11 (p. 4 PDF), emphasis added). To those in Florida who want to test my theory: don't look for tar-balls, don't wait for tar-balls, that is a canard.

Instead, take samples like the University of Georgia folk do, be scientific, because the toxins are moving by you Florida, and are in the Gulf Stream now, under the surface.

The reason good samples have to be taken is that 27,000 abandoned oil wells in the GOM are not tested for leaks, so to identify a particular well the "DNA" of that particular oil well needs to be considered.
Posted by Dredd at 6:51 AM