A Tale Of Two Volcanoes 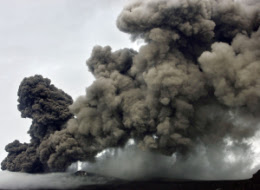 The oil volcano in the Gulf of Mexico and the Icelandic volcano have something in common.

Pressure: the pressure of oil addiction.

The Icelandic volcano had a large, thick, heavy ice sheet holding its contents down, not allowing those contents to spew into the atmosphere.

The Gulf of Mexico oil field had a large, thick, heavy ocean bottom holding its contents down, not allowing those contents to spew into the Gulf.

Then a long time ago came oil addiction along with its mantra drill baby drill.

Eventually the addiction to oil led to global warming which eventually melted the ice field sufficiently for the pressure to break through the ice field.

So the contents of the volcano deep in the earth then escaped to damage civilization.

The addiction requires more and more oil, so they punctured the sea bed and tapped into the oil reservoir which was under great pressure.

When the Deepwater Horizon drilling rig exploded and sank, the pressure was free to push the oil volcano into the precious gulf, and free to begin to damage civilization as well as the environment.

Here is a video of a section of the pipe spewing oil: