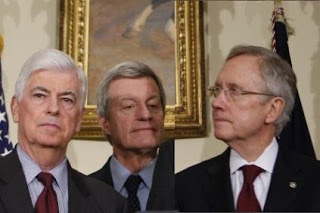 Senator Dorgan had an idea any reform minded Senator would embrace.

His Amendment to the status quo, where Americans pay many times more for pharmaceuticals than any other nation in the civilized world, would have ended the rape and plunder of needy Americans by Big Pharma.

It would have allowed us to purchase prescription drugs for a fair price.

The three boyz pictured in the photo voted against Dorgan's Amendment, as did a number of phonies who say they are for health care reform:

(vote on Dorgan Amdt. No. 2793). Meanwhile several republicans, who a progressive would not have expected to vote for the amendment, voted to be fair to Americans:

(ibid). Can you say WTF? This is one for Ed Shultz's psycho talk, or perhaps a new segment of his show called "Psycho Vote".

Dorgan's Amendment failed and will not be in the "bill to bail out mini-AIG", which the phonies call "health care reform".

Thanks to all the Senators who care about needy Americans!
Posted by Dredd at 12:30 PM