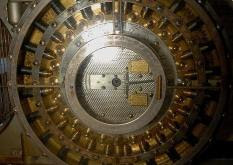 That is the one catch all phrase that is repeated no matter what shape the banks and Wall Street think they are in.

During those times when they tell us "these are good times", if you ask whose money is in the banks they will say "it's your money".

They explain that when we put our money into their bank it is still our money.

They explain that in "the banking system" they loan our money out as if it was not ours but instead as if it was theirs.

Even when they loan it to us.

Yes, that is also called "the banking system".

During those times when they tell us "these are not good times", if you ask whose money is in the banks they will still say "it's your money".

When they haven't done a good job with our money in their bank, the money becomes invisible so that they can no longer find it in their bank.

Not to worry, that is called a correction in "the banking system".

Yes, do not despair, the government (which is called "your government") then puts imaginary money into the banks, and for some reason the money can then once again be found.

During those times, if you ask whose money is in the banks they will say "it's your money".

Somehow I get the notion that they think "it's your money" is some sort of comforting statement.

At least I am sure it is comforting to them.

I say that because after having said "correction" they seem to blast on as if correction is a simple bridge they cross all the time saying "it's your money".

I can only conclude that they must be time travellers who sometimes spend, loan, and waste money we have now, and the remainder of the time they spend money we are promised to have in the future.

When some bankster tells me "it's your money" I always suspect that they have travelled in time a bit, at least in their own mind, and that "your" means "your family" that is yet unborn.

And of course in "the banking system" that trip is always paid for because "it's your money".
Posted by Dredd at 8:12 AM