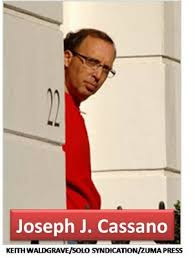 It surprised me that an MSM program would uncover what I haven't even seen on MSNBC, or Democracy Now for that matter.

He covered the behind the scene events we exposed here about AIG a while back.

He exposed Cassano, the spawn of Mike Milken who was once called the junk bond king, and who went to federal prison years ago.

He exposed Joseph Cassano who has now fled from the USA to a foreign destination after decimating us economically.

Good for you ABC News! Keep up the good work.
Posted by Dredd at 6:27 PM